To many residents of the Badger State, there are only two ecoregions of note: Up North, the land of forests and lakes and vacation rentals, and the Rest of the State. Biologists, however, are a bit more definitive in describing Wisconsin’s ecoregions, each with a unique combination of vegetation, physical features, and other characteristics that support wildlife.

While experts agree there are more than two ecoregions, sources differ slightly on exactly how many regions there are and how they should be delineated. The Department of Natural Resources cites the six ecoregions identified by Hole and Germain in 1994, while the United States Geologic Service (USGS) identifies seven. Wisconsin Birdlife, the encyclopedic reference by Sam Robbins, lists eight “avifaunal regions,” sections of the state that closely resemble the regions marked off on the DNR and USGS maps.

Robbins overlays a “tension zone” to the mix, a band roughly thirty to sixty miles wide running diagonally across the state, from St. Croix Falls in the northwest to Racine in the southeast. This transitional swath contains the northern range limit for southern plant species and the southern range limit for numerous northern plants. Because of this intersect, we often see bird species “pushing the envelope” of what might be expected within the state.

As you travel through Wisconsin, starting in the far north at Lake Superior, you notice distinct changes in vegetation, topography, and, sometimes, in resident and migratory bird populations. Roughly 10,000 years ago, glaciers scoured most of Wisconsin, leaving their mark. The sandy region in central Wisconsin was formed when vast glacial Lake Wisconsin drained, leaving a flat landscape. The southeastern corner of the state was molded by the glacier into a series of ridges and landforms, such as kettles and drumlins, that were left behind as the ice sheets melted. The gentle hills and valleys of the southwestern part of the state were untouched by the glaciers, but give evidence of millions of years of water sculpting the bedrock into valleys and bluffs.

Water, in fact, defines Wisconsin in many respects—whether frozen as glaciers in years past or framing the state today. Lake Michigan bounds its eastern edge, the Mississippi and St. Croix Rivers define the western boundary, and Lake Superior caps the north. These major waterways provide important avian migration corridors, vital as the state is located roughly halfway between tundra and tropics.

Our journey through the state’s ecoregions will begin at Lake Superior and its boreal forests and end in the hills and valleys of the Driftless Area, with stops at many remarkable bird watching sites along the way.

Devils Island, the northernmost of the Apostle Islands, has flat and poorly drained uplands, which have created a conifer bog. Birds found on the island are similar to species much more common far north in boreal Canada. The island is the only known nesting area for pine grosbeak and Wilson’s warbler in the state.

As you drive east onto Wisconsin Point, a sand spit running into Lake Superior near the city of Superior, you see scrubby aspen growth that is soon replaced by grasses that were planted to prevent erosion. Since most species avoid flying over large bodies of water, the Point is sometimes covered with travel-weary birds. In recent years, parasitic jaegers and other state rarities have been spotted at this migrant trap. Snowy owls are frequently seen in and near Superior during winter months, and great gray owls occasionally winter in the area’s forests.

Just south of the Lake Superior region, the landscape is dominated by forests, which are dotted with numerous lakes and traversed by streams. If driving into this area from the south, you realize you have reached the famed “Up North” destination of countless vacationers.

Prior to European settlement, this area was covered with northern mesic forest, a type found in regions with moderate moisture. Also referred to as the Northern Highland Forest, this region contains both deciduous and coniferous forests. The deciduous tracts are made up primarily of sugar maple, white and yellow birch, and basswood. White and red pine, hemlock, balsam fir, and black and white spruce characterize the coniferous forests. The extensive Nicolet and Chequamegon National Forests, which cover 1.5 million acres, are found within this region. Flowages are home to bald eagles and osprey, while lakes within support breeding populations of common loons.

On the western edge of the Northern Upland Forest region you find Crex Meadows Wildlife Area, home to sharp-tailed grouse and trumpeter swans. In addition to wooded uplands, Crex Meadows contains several flowages, marshes, and restored brush prairie. In all, more than 270 bird species have been seen within the 30,000-acre area, which is also home to badgers, pocket gophers, and hognose snakes.

The Central Sand Plain is a roughly triangular area in the center of the state, bisected by the Wisconsin River. When Aldo Leopold wrote The Sand County Almanac, he was smack-dab in the middle of this unique region. While observing cranes in a piece titled “Marshland Elegy,” he wrote that “a sense of time lies heavy on such a place…The cranes stand, as it were, upon the sodden pages of their own history.” That history goes back 10,000 years, when the extinct Lake Wisconsin was formed by the melting of glaciers. When the lake drained, a far-reaching flat landscape remained, characterized by large expanses of very sandy soil.

This region now includes extensive natural and restored marshes, sedge meadows, lowland hardwoods, and sphagnum bogs, as well as commercial cranberry operations, irrigated cropland and pasture, and large tracts of pine and oak forest, aspen, and pine. In many respects, the Central Sand Plain has the state’s most severe climate, with summer frosts caused by cold air settling into the lowland at night and periods of drought.

The Necedah National Wildlife Refuge is located roughly in the middle of the Central Sands ecoregion. Necedah was established as a national wildlife refuge in 1939, after attempts at farming in the area failed. It was chosen as the Midwest site for the reintroduction of whooping cranes, and is now home to approximately fifty of the birds. The refuge has a number of trails and observation decks that provide views of sandhill cranes, waterfowl, and other birds using the refuge for breeding grounds or during migration.

The Sandhill Wildlife Area and Buena Vista Grasslands Wildlife Area are some of the other bird watching sites of note within the Central Sands Region.

The Lake Michigan Shoreland, also called the Lake Michigan Lowland, is a critically important migratory route for waterfowl, raptors, and shorebirds. Some species of diving ducks more commonly associated with the Atlantic Ocean, such as scoters, are often seen offshore near the Schlitz Audubon Center, at the south end of this region. The low, moist inland areas of the region are characterized by sugar maple, hemlock, yellow birch, basswood, and American elm.

In Ozaukee County, the Concordia College parking lot provides exceptional hawk watching opportunities, especially from August to November, with an impressive list of waterfowl and other species as well. Wisconsin’s Favorite Bird Haunts, published by the Wisconsin Society for Ornithology, reports that the bluff has an “armchair” list of more than 150 species in a two-year period.

Farther north along the shore in Port Washington, sixteen species of gulls have been seen near the harbor in recent years. Glaucous, Iceland, Thayer’s, and lesser and greater black-backed gulls are regular winter visitors to the harbor.

Along the west shore of Green Bay, the extensive marshland is home to large numbers of birds. The Barkhausen Waterfowl Preserve and nearby Bay Beach Wildlife Sanctuary host a variety of migratory and nesting ducks, while the shallow waters along the bay shore at times provide prime shorebird habitat.

Far north, in the Door County peninsula, The Ridges Sanctuary runs along the Lake Michigan shore at Bailey’s Harbor. The preserve is home to twenty-five species of orchids and a rich variety of birdlife. Nearly 500 vascular plants, including insect-eating pitcher plants and sundew, are found in the sanctuary’s rich complex of boreal forest and wetlands. Only 2 percent of Wisconsin’s land area is covered by boreal forest, including this area of Door County and far northern Wisconsin along the Lake Superior shore.

The southeastern quarter of the state, excluding a portion of the Lake Michigan shoreline, is known as the Southeastern Moraines, or Southeastern Ridges and Lowlands. Moraines are defined as “accumulations of earth and stone carried and finally deposited by a glacier.” This region is characterized by ridges and lowlands formed by glacial action.

Prior to European settlement, the landscape of this area was primarily oak savanna with some tallgrass prairie, oak woodland, and wetland complexes. Today, only glimpses of that landscape remain, as this region is the most heavily developed area of the state. Much of the land is now agricultural, with farmland containing small remnant woodlots and marshes, or urbanized.

A shallow, peat-filled lake bed, Horicon Marsh is the premiere bird watching site within this region. Hundreds of thousands of geese and ducks can be seen at Horicon during migration. The refuge is also home to the largest heron and egret nesting colony in Wisconsin.

Other good bird-watching venues within the Southern Moraines region include the Northern and Southern Units of the Kettle Moraine State Forest, Riveredge Nature Center in Ozaukee County, Goose Pond in Dane County, and the Bong State Recreation and Wildlife Area near Kenosha.

The Driftless Area in the southwestern corner of the state, also referred to as the Western Driftless Upland, presents a landscape of rolling hills and picturesque valleys. The term “driftless” refers to the fact that the continental glaciers that covered most of the state missed this region. Driving west from Madison toward the Mississippi River, you notice sandstone and dolomite exposures, with many small farms nestled into the hillsides along the highway. Small, wet meadows in the region are often associated with spring-fed coulee streams. Barred owls and pileated woodpeckers can be found in the lowland hardwoods along the Mississippi River floodplain and the several large rivers that feed into the Mississippi.

Pastureland is common in this region, especially in stream bottoms and in some of the former prairies and oak savannas south of the Wisconsin River. Wild turkeys flourish in the area, which also includes hardwood forests of white oak, sugar maple, and aspen.

The Mississippi River borders the western part of the region and serves as a major flyway during migration. High numbers of waterfowl utilize the Trempealeau and the Upper Mississippi River Wildlife Refuges, including tundra swans and canvasback ducks.

40In addition to its great scenic beauty, the Driftless Area offers a wealth of bird watching opportunities, from Wyalusing and Nelson Dewey State Parks in the south to the Willow River State Park in the north. 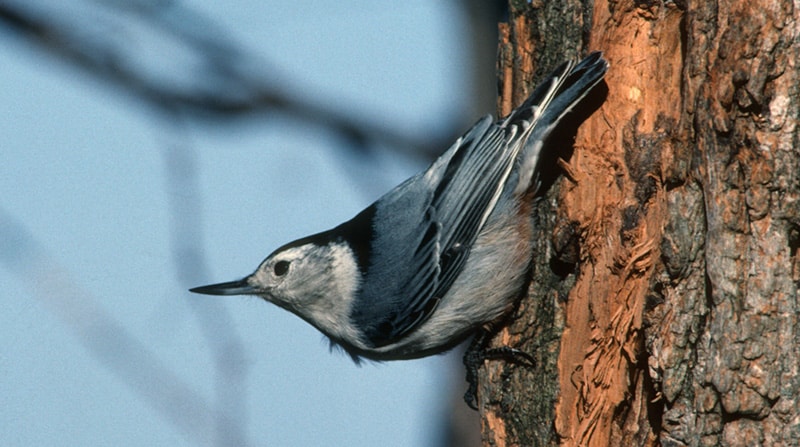