Autumn yields only reluctantly to winter in Alabama, and in some years, winter is an on-again off-again affair. Temperatures can be quite mild except for a few cold fronts passing through the state. Alabama actually has more birds in the winter than in summer.  This is caused by the influx of northern breeding birds that come to winter in the temperate gulf coast climate.  Many sparrows, juncos, blackbirds, warblers, and the yellow-bellied sapsucker come to Alabama for the winter.

Winter in Alabama is a time for ducks and sparrows. No winter visit to north Alabama would be complete without going to Wheeler National Wildlife Refuge to view the ducks from the enclosed viewing building. You can get quite close to them, and a microphone mounted in the middle of the pond gives you an intimate window into the duck world. It isn’t uncommon to see 10 duck species at one time. The walk to the duck building is always interesting too. Winter and Carolina wrens are common, and in some years so are fox sparrows.  Look for hermit thrush, chickadees, and titmice in the trees. Yellow-bellied sapsucker and red-bellied and downy woodpecker are also common. Look for brown creeper on the tree trunks.

Beginning in mid-fall, northern-breeding sparrows start to arrive. Savannah, vesper, and song sparrows inhabit fencerows and grassy fields. Swamp sparrows find wet areas, and white-throated sparrows head for dense undergrowth and backyard feeders that offer proper cover. Field and chipping sparrows, year-round residents, become more evident as they gather into flocks and visit feeders. White-crowned sparrows are local—meaning they are present, but only in certain spots—in the Coastal Plain and Tennessee Valley Regions. When they come, they occupy weedy fence rows. Dark-eyed juncos tend to return to the same general area winter after winter and to gather in small flocks. For the more experienced and tenacious birder, south Alabama also offers wintering populations of Le Conte’s, Henslow’s, and Lincoln’s sparrows, but these are difficult to locate, and a certain amount of luck and serious looking are necessary to observe them.

The Coastal Region is a hummingbird haven in winter.  Although the number fluctuates from year to year, it is possible, by using information posted on the web and Alabama’s Rare Bird Alert, to see six or seven hummingbird species in a day or two.  A few years ago, that statement would have been enough to make you write-off the author as a nut.  However, groundbreaking research by a small group of birders and banders led by The Hummer/Bird Study Group, Inc. has established the presence of a small but regular number of western hummers that winter east of the Mississippi River.  Banders in this group, established by Alabama bird watchers Bob and Martha Sargent, have banded 11 hummingbird species in Alabama, including the ruby-throated. Although the majority of winter hummers are on the coast, there are still good numbers elsewhere in Alabama. Check the Rare Bird Alert before traveling in Alabama in the winter.

If you are on the coast in winter, look out to sea, and often you can see northern gannets riding the air currents right along the shore, and Bonaparte’s gulls among the laughing and herring gulls.

Alabama has many sod farms, and most of them are very birder-friendly. These farms can be wonderful places to find many birds, particularly in winter. American pipits, Lapland longspurs, shorebirds, northern harriers, and others are regulars. The best time to visit is on Sunday when they are closed and thus birders will not interfere with the activities of the workforce. If the gate is closed, do not enter. If the gate is open, ask before birding, and remember that the work comes before birding. Many of these farms can be viewed quite successfully from the road with a good scope. Be very respectful of this privilege, so you don’t spoil it for the next bird watcher. Also, be careful where you drive as the constant irrigation can mean deep mud.

The American bald eagle has made a stunning comeback in Alabama, as in much of the nation.  At this writing in 2004 there are about two dozen nesting pairs and many more that winter in Alabama.  It is now possible to see a bald eagle any time of the year in any county of the state.  Of course, winter is the best time to see them because of the influx of wintering birds and their concentration in two or three general areas.  The two biggest winter concentrations are at Pickwick Lake in extreme northwest Alabama, and at Lake Guntersville, northeast of Birmingham.  A smaller, but important location for winter eagles is Lake Eufaula, on the Chattahoochee River between southern Georgia and southern Alabama.

Belted kingfishers and great blue herons are common in all seasons, but many more congregate in Alabama in the winter to escape harsh northern winters. Look for kingfishers on wires over water and herons near any pond or shallow body of water.

By late winter, and continuing into early spring, male American woodcock begin their spectacular mating displays. These occur right at dusk, and on moonlit nights they may persist well into the night. The best time to see them is when the moon is casting a shadow toward you, with the bird in between you and the moon. Woodcocks like sedge fields with wooded edges or with trees interspersed with the grass.

The woodcocks bring us back to spring, and they get us to thinking about the coming migration marking the beginning of another year of watching and enjoying Alabama’s birds. 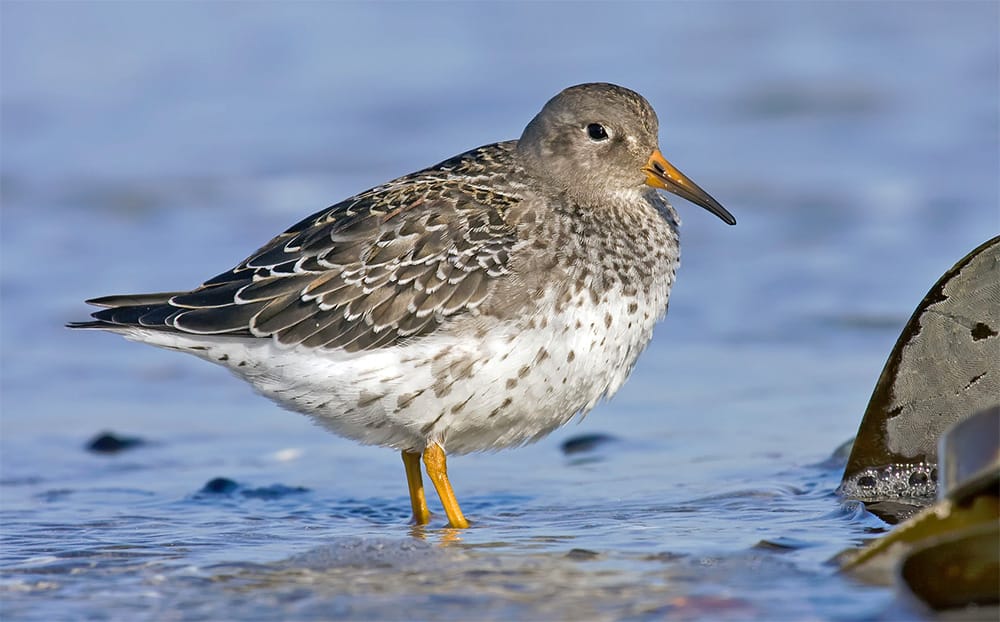