The Canada goose has an unmistakable black neck and white cheek strap. In flight, Canadas beat their wings deeply and slowly and show a black-and-white tail. More than a dozen different subspecies exist in North America, and their sizes vary from 25 to 45 inches in length.

Their familiar call features a deep, two-syllable ha-ronk, given by mated pairs as well as flocking birds. Canadas also give a variety of softer cackling calls to each other, especially when they are on the ground.

The Canada goose is a habitat generalist when it comes to water, settling in lakes, bays, rivers, and city parks and ponds. The species has enjoyed unprecedented success in living with or near humans. Today it nests all across the upper two-thirds of North America.

Some re-established populations of Canada goose are year-round, non-migratory residents. However, many birds nesting in northern North America migrate to the southern United States in winter.

Spring migration begins early, and many females are incubating by mid-March. Some housing developments and golf courses find them (and their droppings) a nuisance.

Aquatic plants, grasses, grains, and seeds are the Canada’s primary foods. To reach submerged food, it will tip its tail in the air and extend its neck below the water’s surface. Flocks leave roosting areas in the morning to forage in nearby fields, meadows, and marshes. Urban populations often live on handouts of cracked corn near city park lakes and golf course ponds.

Located on a high spot near water, the nest features a small mound made of surrounding sticks and vegetation and lined with down plucked from the female. Half a dozen or more eggs are laid and incubated by the female for nearly a month.

Meanwhile, the male stands guard and brings her food. Within two days of hatching, young goslings are herded by their parents to the nearest water. Families stay together until the following breeding season, though young birds become self-sufficient in about two months.

Listen to a Canada Goose 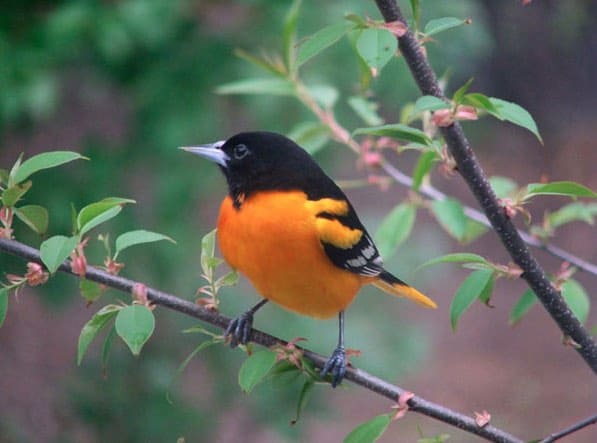