While overlooking the mudflats of Alaska’s Copper River Delta, I was reduced to being a slack-jawed gaper. It was May 4, high tide, and thousands upon thousands of shorebirds clustered just feet away.

I should have been able to make a guess about how many there were, but I couldn’t. My skills as a field biologist utterly failed me as I stood there, mouth open, binoculars hanging uselessly around my neck. Eventually, I settled on the word “innumerable,” closed my jaw, and watched.

The mats of birds were mostly western sandpipers and dunlin. Just about every western sandpiper on the planet—some 3.5 million individuals—and the entire population of the Pacific race of dunlin—another half-million birds—use the delta during their spring migration. These two may have been the majority, but they weren’t alone. In the grass near the waterline, thousands of least sandpipers foraged with rapid dips of their short bills. Less abundant, larger species hid like Easter eggs among the hordes of peeps: pectoral sandpipers, Wilson’s snipe, short-billed dowitcher, lesser and greater yellowlegs, whimbrels, and Hudsonian godwits.

Regularly, clusters of birds rose and swirled around the shore. Once, they closed in tight formation and raced upward, a shifting blob of fluttering wings. With each wheeling turn of the flocks, I could hear the hiss of wind over a billion feathers.

A falcon appeared above and I realized the cause of the birds’ panic. The dark raptor controlled the flock, pushing them right and left with each dip of its scythe wing. For a long moment nothing happened. The shorebirds pulsed and the falcon’s wings locked. The peregrine collapsed and fell. No, it did not fall: It plunged. It pumped its wings a half dozen times, and then pulled them half closed. Gravity and aerodynamics came together in a dark, bird-shaped blur. In my peripheral vision I could see the shorebirds impossibly tight together, and for second I wondered how flight was even possible in that chaos of flapping wings and shifting turns.

One sandpiper came loose from the flock. Whether it was an accident or a decision to make a break for cover, I’ll never know. It was a fatal mistake. With a slight twist of its tail, the peregrine shifted focus and flattened out behind the fleeing shorebird. There was no contest. As the two forms merged into one, there was a puff of light down, and it was over. The falcon flew off with the unlucky western sandpiper in its grasp.

Alaska’s Copper River drains water from three mountain ranges. It’s aptly named. Not only does it emerge from a land famous for its minerals, but also the water itself is red-brown from glacial sediment. The river flows rapidly from the mountains of central Alaska before bursting out of the Chugach Mountains toward the coast. There, the Copper braids into a hundred channels before eventually meeting the Gulf of Alaska.

For millions of years, the Copper has dumped sediment into the ocean. The glacial till from the mountains now support a mosaic of forest, salt marshes, tidal sloughs, and mud flats. These rich habitats are one of the most important resources for migrating shorebirds in western North America.

But it’s not important only to shorebirds. According to the U.S. Forest Service, fifty to seventy percent of the tule subspecies of white-fronted goose and the world’s entire population of dusky Canada geese nest on the delta. Countless waterfowl, songbirds, and raptors make their nests in the area. Seabirds, including gulls, alcids, and terns rely on the rich estuaries of the Copper and nearby Prince William Sound. More than drama, these numbers symbolize the importance of the place. Few other locations in the world can boast such a volume of life. Recognizing the importance of the area, the U.S. Forest Service has designated the 700,000-acre Copper River Delta a special management area. There, wildlife and associated low-impact recreation holds sway over commercial exploitation.

After the falcon’s successful attack, the shorebirds settled down and the tide began to ebb. Several dozen birders stood along the roadside. I was with my friend, fellow photographer, and biologist Milo Burcham. Milo is a long-time Cordova resident, and he’s had the opportunity to watch the shorebird migration for years. Southern Prince William Sound, where Cordova is located, is a wet place, and our day on the bay was no exception. A low ceiling of clouds hung over the water, obscuring the still-snowy mountains that rose straight from the tideline. For the time being, it wasn’t raining, but I suspected we wouldn’t be dry for long.

Behind us, away from the water, a temperate rainforest rose into the mist. From the trees we could hear the calls of Steller’s jays and the twittering song of Pacific wren. Closer, a chip note drew my attention. In the row of scruffy willows between the beach and the trees, a mixed flock of sparrows foraged. From the group I could make out song, white-crowned, and golden-crowned sparrows. When a rufous hummingbird blasted through my binocular view it drove home the diversity of the dripping forest.

As though on cue, rain spattered the water and then the hoods of our jackets. We covered our optics and headed toward Milo’s truck, parked a short distance away. The other birders, a mix of locals and visitors, followed suit.

Each year, in early May, Cordova hosts the Copper River Delta Shorebird Festival. Cordova is not easy to get to, but the event draws visitors from across the state and country. There are no roads to the small fishing village, so access is by boat or airplane. Coming from my home in Fairbanks, a few hundred miles north, I opted for the marine route. I drove a few hours from Fairbanks to the port of Valdez, left my vehicle behind, and boarded the high-speed ferry Chenega with my bicycle and a few days’ worth of clothes, binoculars, and camera gear. From there, it’s a three-hour ride down the eastern shore of Prince William Sound to Cordova.

Though Cordova has regular jet service from Anchorage and Juneau, I recommend the ocean route. I spent my journey from Valdez sitting in the ferry’s lounge, glassing the passing flocks of birds. Despite the speed of the ship, I was able to easily identify a suite of species: common murre, pigeon guillemot, and tufted puffins sat on the clear blue water, and Arctic terns; glaucous-winged, mew, herring, and Bonaparte’s gulls followed the ship. Bald eagles, northwestern crows, and black oystercatchers patrolled the rocky shoreline. When I glimpsed an ancient murrelet fleeing from the ship’s wake, I stood up and nearly shouted, but thought better of it when I looked over the faces of the majority nonbirders on the ferry.

The size of the mostly roadless Copper Delta is hard to wrap one’s head around. The accessible corners, like Hartney Bay just outside Cordova, are a sliver of the whole mosaic. But as large and important as it is to migrant shorebirds, the delta doesn’t exist in a vacuum. Shorebird stopover locations along the western coast of North America are often referred to as a chain, but I find that to be a poor analogy. Chains imply that these sites are connected, but they aren’t. Rather, they are more like isolated rings, separated by hundreds of miles of rugged shoreline, forageless beaches, and more recently, expanses of human development. The vacant areas between stopover locations are veritable deserts for the migrants passing overhead. The stopovers, including the Salton Sea, San Francisco Bay, Gray’s Harbor, and of course the Copper Delta, are the oases.

Shorebirds remain at each site for only a few days. In spring, males pass first, racing north to arrive on the breeding grounds a few days ahead of the females. There, they establish territories and compete for dominance with rival males prior to the arrival of their potential mates. For birders, this means that the window for observing the largest congregations of shorebirds is brief.

The rain continued the next morning. But, unwilling to waste that time indoors, Milo and I hooked his boat trailer to the truck and headed for the boat ramp. Cordova’s harbor and surroundings are protected from the open water of Prince William Sound by a series of islands. Even on days with nasty weather, the seas near town are usually calm. As Milo’s small, but sea-worthy craft carried us away from the village, I glassed the water and nearby shore with my binoculars.

At the mouth of the harbor, a huge raft of gulls sat waiting for fishermen. Glaucous-winged, glaucous, herring, Bonaparte’s, mew, and at least one slaty-backed gull were in the mix. Farther out, we eased toward some rocks where a single black oystercatcher preened atop a seaweed-coated boulder. Atop another was a bevy of sea otters that eyed us curiously as we motored slowly past. A single Kittlitz’s murrelet flushed off the water in front of the boat shortly before we found a pair of marbled murrelets in a quiet bay. The two dove synchronously, appearing thirty seconds later in another location with small fish flashing in their bills.

In the final hours before I boarded the ferry and headed for home, I sat on a small beach, spitting distance from Cordova’s harbor. A flock of least sandpipers moved along a narrow strip of mud between a patch of spruces and the open water. I could see their telltale yellow legs through my binoculars, between the falling drops of rain. These birds were on their way north after a winter patrolling the much warmer beaches of South and Central America. Cordova is one stop of many on their yearly journey.

Though the Copper River Delta is protected, I don’t feel secure in the future of these birds. Shorebirds cover huge distances, and the stops along the way are vital. If any these are lost, the wild coastline of the Copper River Delta could grow as lonely as the expanses between them. The stopovers may not be linked like a chain, but perhaps the metaphor is not so inappropriate after all. It is the birds that connect the links, the birds that will suffer if one of them weakens … or breaks.

While I watched the flock disperse across the expanding mudflat, I could feel the connection to the estuaries of Central America, of the Salton Sea, the foggy shores beneath the Golden Gate. The mudflats of Gray’s Harbor, too, where during college, I’d cut class to watch the birds pass. Then and now, I felt the call of the northern tundra, where, in a few weeks, these birds would be establishing territories and building nests. On the edge of the Copper Delta, that feeling of connectivity came easily. The birds migrating past depended not just on this place, but rather, on many.

David W. Shaw is a writer, photographer, guide, and biologist living in Fairbanks, Alaska. He can often be found atop an alpine ridge with binoculars, poking under mossy rocks, or exploring the world looking for birds. Learn more at www.david-w-shaw.com » 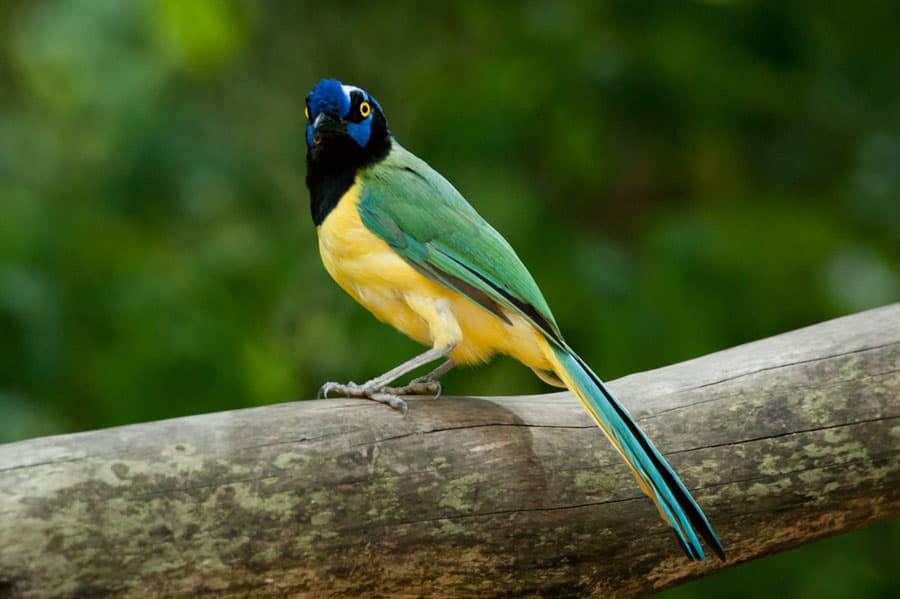 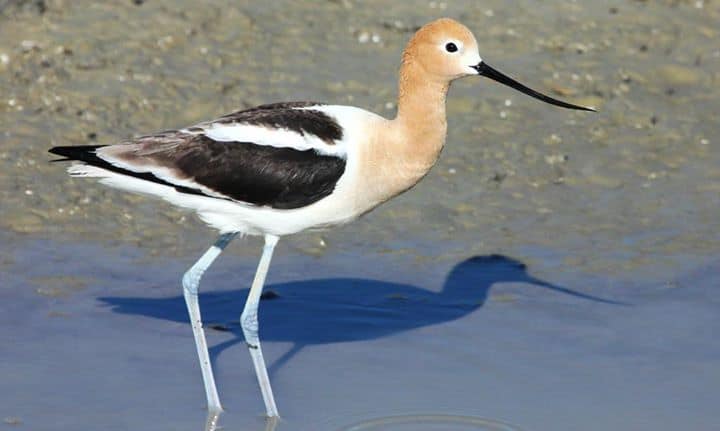 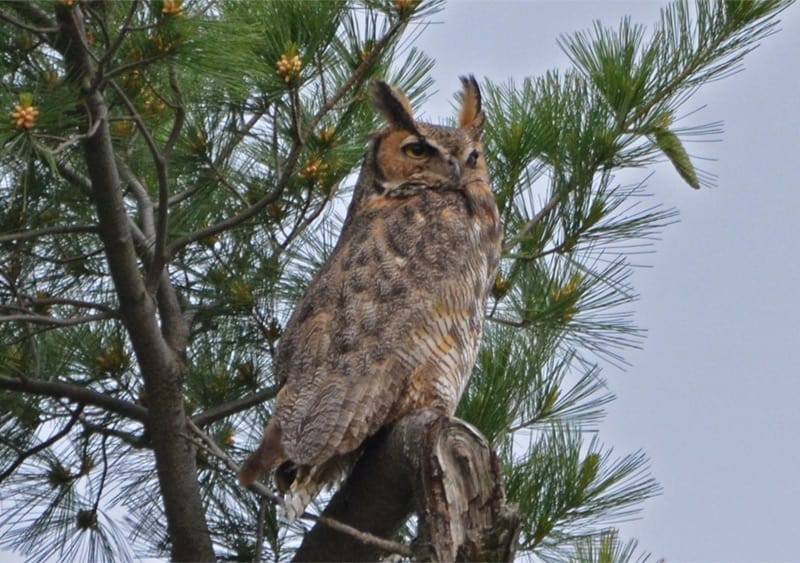