From trails along wooded bluffs overlooking the Mississippi River, you can watch hawks, ospreys, and bald eagles glide along above the river in spring and fall. From the visitors’ center, walk along the boardwalk under the highway, down to the Yellow River. There in the bottomland hardwood forest, red-shouldered hawks, cerulean warblers, yellow-bellied sapsuckers, pileated woodpeckers, wood thrushes, and scarlet tanagers nest. Mississippi River backwater nesters include bald eagles, great egrets, double-crested cormorants, and prothonotary warblers. The area is one of the best Iowa locations for breeding warblers. Blue-gray gnatcatchers, red-eyed vireos, cerulean warblers, and ovenbirds are common. Golden eagles winter in the woods.

The visitors’ center, open seven days a week, offers guided bird walks one Saturday a month in summer. The last weekend in September is Hawk Watch Weekend. Primitive camping is available at nearby Yellow River State Forest, where ruffed grouse can be heard drumming in spring.

Along a bend in the Des Moines River, this scenic, wooded 1563-acre state park is a birders’ paradise. River, streams, a 30-acre lake, and woods attract migrating raptors, shorebirds, waterfowl, and perching birds.

On a winter day in the southeastern corner of Iowa, a visitor may see 50 to 400 bald eagles along the Mississippi River riverfront at Keokuk. Use binoculars or spotting scopes to scan the tops of tall trees on both sides of the river. The eagles are often active in the middle of the day, circling high over the river and swooping down to snatch floating fish that have been stunned coming over the dam.

At Pool #19, above Lock and Dam #19, thousands of canvasbacks, lesser scaup, and 20 other species of waterfowl assemble on the river during fall. Nearly half a million birds may be present, including American white pelican, great egrets, and assorted gulls. A good vantage point is from the boat ramp. Pelicans, great blue herons, and great egrets spend the summer in the marshy area northeast of the boat ramp.

This shallow, lush marsh on the Iowa River is an important rest spot for migrating American white pelicans, cormorants, and rails. In March and April the area abounds in waterfowl, especially mallard and blue-winged teal, which visitors can see by walking the extensive system of dikes. Birders often see river otters here while looking for birds.

Sandhill cranes have been nesting at Otter Creek since 1992. The area has attracted the cranes because it fulfills their special nesting requirements of large, open, freshwater wetlands. From April to November, the cranes are often seen during the day along the north side of the area.

Visitors in summer should also find great blue herons, sedge wrens, and yellow-headed blackbirds, with a possibility of great-tailed grackles. For current information on the best viewing areas, stop in and ask the staff at the Otter Creek Unit headquarters, adjacent to the marsh.

Birders have found more than 300 species of birds at Saylorville Lake. From pullouts on the dam in spring and fall, look for migrant loons, grebes, and waterfowl. Songbirds fill the surrounding wooded areas, where Acadian flycatchers, cerulean warblers, Cooper’s hawks, and barred owls nest. Bald eagles congregate around the dam in winter. At the north end of the lake, Jester County. Park hosts shorebirds and huge flocks of pelicans in September.

At the visitors’ center (January through October), at the east end of the dam, you can obtain a map and get warm while watching the bird feeders for red-bellied woodpeckers, tufted titmice, American goldfinches, and purple finches.

Thirty miles to the southeast, also on the Des Moines River, Red Rock Lake hosts similar birds. Below the dam in winter, one can watch bald eagles, waterfowl, and thousands of gulls.

Union Slough has been the site of several successful introductions of trumpeter swans, and it produces about 2,500 wood ducks every year, as well as other waterfowl. On a March or April day on the refuge it’s common to see gadwalls, American wigeons, snow geese, and many other species of waterfowl. The 1,300 acres of marsh and wetland also provide nesting habitat for pied-billed grebes, least bitterns, Virginia rails, gray partridges, swamp sparrows, bobolinks, and yellow-headed blackbirds.

Many birds depend on the refuge during their migratory journeys, including pelicans, herons, bald eagles, Franklin’s gulls, Forster’s terns, grasshopper sparrows, and dickcissels. Assorted warblers also stop over here. In summer and fall, when the water level is lowered in one or more of the ponds, masses of shorebirds visit at the refuge. Viewing is mostly from the road, though there are a few short foot trails.

Lost Island Lake, Iowa’s 6sixth largest natural lake, was created by a glacier and has a maximum depth of a mere 14 feet. The wetlands trail along a series of old dikes allows close views of waterbirds and gives a vivid sense of what Iowa’s original prairie pothole habitat once was, when wetlands and marshes covered so much of northern Iowa that a person could canoe almost across the state without getting out his boat.

Nearby Dewey’s Pasture Wildlife Area, a 960-acre prairie pothole, has marshes, shallow lakes and grasslands that are vital habitat for waterfowl, shorebirds and other marsh species.

One mile north of the town of Spirit Lake (Dickinson Co.)

One of Iowa’s “Great Lakes,” (which also include East Okoboji and West Okoboji) Spirit Lake is Iowa’s largest natural lake (5,684 acres). It’s a beautiful area, and one that is well equipped to entertain tourists, including birders.

There are great birding sites in all directions at Spirit Lake. Migrating waterfowl and loons stop over at Orleans Beach, at the south end of the lake. Mini-Wakan State Park, at the north end of the lake, attracts migrating warblers and other songbirds, especially in May, and Franklin’s gulls and Forster’s terns in summer. To the west of Spirit Lake, Kettleson Waterfowl Production Area hosts shorebirds in late summer. At Kettleson Hogsback, look from the boat ramp west of the Big Sioux Wildlife Unit for American white pelicans and nesting redheads and ruddy ducks on the south end of Hottes Lake. At McBreen Marsh, Virginia rails and American and least bitterns nest.

Waubonsie State Park lets you experience the unique Loess Hills that stretch along 200 miles of the Missouri River. From the overlook at Ridge Trail one can look down on the Missouri River and its wide, flat valley in September and October and watch hawks, eagles, and ospreys flying downriver along Missouri River flyway. Also in the park one may find migrating thrushes, warblers, and sparrows.

Among the oak-clad bluffs and hills, the nesting birds include some that are unusual in Iowa, such as summer tanagers and chuck-will’s-widows (in the bluffs just north of park). Other species, more typical of Iowa, include turkey vulture, broad-winged hawk, wild turkey, whip-poor-will, ovenbird, Louisiana waterthrushe, Kentucky warbler, and scarlet tanager.

The park offers seven miles of foot trails and eight miles of horse trails, with superlative views, curving along ridges and winding down into valleys.

You can hike among 10 miles of trails through remnant prairies on wind-swept ridges. Watch for nesting whip-poor-wills, scarlet tanagers, Cooper’s hawks, western kingbirds, wood thrushes, ovenbirds, and blue grosbeaks. After heavy rains, shorebirds mass in the area and occasionally fly past the Nature Center Lodge. Short-eared owls visit in winter.

An equal-access boardwalk meanders into the forest woodland, providing all visitors with an opportunity to enjoy a natural experience. You’ll find modern camping facilities. 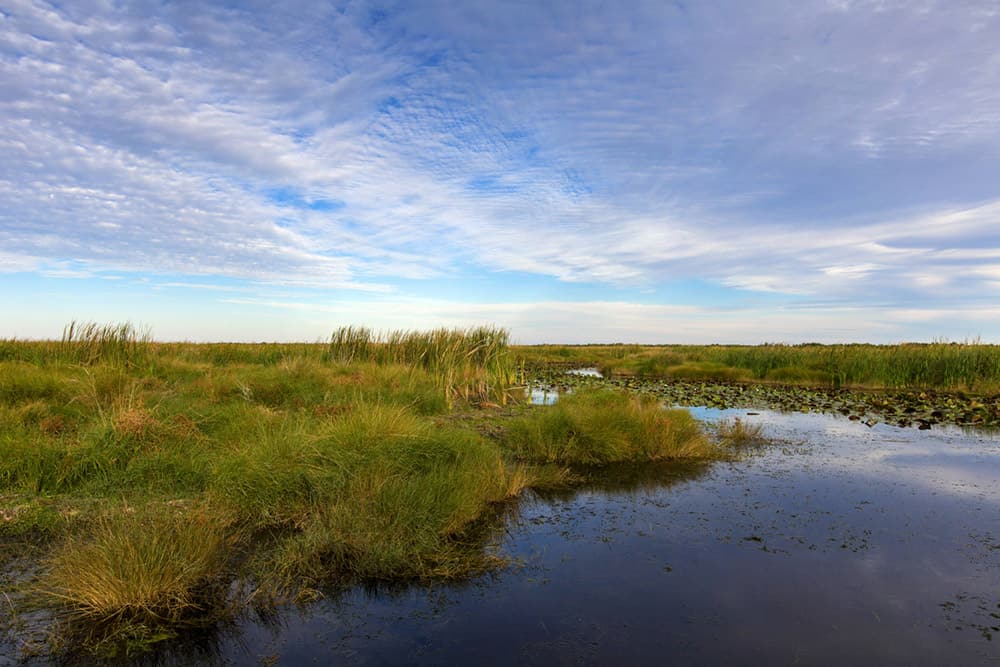