There are three primary ecoregions in Indiana, if we view the state from a bird/habitat distribution perspective. Going from north to south in Indiana, these are the Lake Plain, the Till Plain, and the Hill Country.

To residents of southern Indiana anyone who lives north of Shelbyville, Franklin, or Martinsville is a flat-lander. Those cities are south of Indianapolis. That puts approximately the northern two-thirds of the state in the category of flat land.

The northern two-thirds of Indiana is fairly flat. But it is not uniformly so and is usually divided into two geographic regions, a northern region called the Lake Plain and a southern region, approximately the central third of the state, called the Till Plain.

There are at least 1, 000 natural lakes in this area and before draining there were many more. The largest of these lakes is Lake Wawasee, at 3,600 acres. Other lakes that are big enough for recreational boating are James, Maxinkuckee, Shafer, and Tippecanoe. Much of the shoreline of each of these lakes, and many of the smaller lakes, is lined with houses and summer cottages. Ducks land on the lakes in spring and fall. Mallards nest by some of them. Canada geese are common throughout the Lake Plain, much to the annoyance of many lakeshore property owners.

Rivers in the northern part of the state are the Maumee, which flows northeast, the St. Joseph, Pigeon, Eel, and Tippicanoe, which flow southwest or west then southwest, and the Elkhart and Kankakee, which flow west. All the rivers are rather shallow except after heavy or prolonged rain. All are crooked except where they have been dredged and straightened. None is suitable for commercial navigation.

Where the banks have not been cleared the rivers in northern Indiana are corridors of trees through farmland—excellent bird habitat. But the banks have been cleared in many areas and cultivated fields extend to the banks. There the water is the color of the earth that lines its banks, which is eroded into the river by every rain. There are stretches of muddy shores and there are shorebird-friendly mudflats most of the year.

The northwest and west section of the Lake Plain might almost be considered a separate region. More level and not as well drained as the rest of the Lake Plain, it was wetlands and prairie, in many places wet prairie. The Grand Kankakee River Marsh is estimated to have covered 1,000 square miles extending across northwest Indiana and into Illinois.

In spring, summer, and fall pioneers struggling to cross the wetlands described flocks of ducks and geese rising in clouds ahead of them. Sandhill cranes and a few whooping cranes and trumpeter swans and dozens of species of shorebirds nested in this marshland. Prairichickens were abundant in the drier land, the patches of dry prairie.

Scattered remnants of the Grand Kankakee River Marsh and of other marshland and prairie in northwest Indiana remain. The State Department of Natural Resources manages four Fish and Game Areas in northwest Indiana and there is bit of prairie called Hoosier Prairie. The flocks of ducks and geese, sandhill cranes and shorebirds still visit the remaining plots of marsh and wet prairie in spring and fall. Some of these birds stay and nest. But the whooping cranes, trumpeter swans, and prairie-chickens are long gone.

The extreme northwest part of this region, and of the state, is a series of ridges and sand dunes, then the shore of Lake Michigan. Here is Dunes National Lakeshore and Indiana Dunes State Park. It is here, along the lake shore, that many birds that are rare to Indiana are seen.

The central region of the state, the Till Plain, is more level than either north or south. Typical birds for the Till Plain are similar to those of the Lake Plain ecoregion, except that Carolina chickadee replaces black-capped, and two other more southerly-distributed species, red-bellied woodpecker and northern cardinal, become more common. It’s more nearly flatland. However, the highest elevation in the state, 1,285 feet above sea level, is in Randolph County in the eastern part of this region.

The Wabash River originates in Ohio and flows northwest across a bit of this region into the northern, then southwest back into and across the central region and the state. In the west central part of the state the Wabash becomes the boundary between Indiana and Illinois and flows generally south

The Eel River flows from the northeast into the Wabash, the Salamonie, and Mississinewa from the southeast and the Tippecanoe from the north. The White River flows southwest through the central part of this region, through Indianapolis, and joins the Wabash in southwest Indiana. All these waterways serve as migration corridors during spring and fall and as feeding and loafing habitat for ducks and Canada geese.

Both the Lake Plain and Till Plain are agricultural areas. But there are many towns and cities. Several of the cities—Indianapolis, Fort Wayne, South Bend, Gary—are the biggest in the state. The area around Gary is a sprawling industrial complex.

The forests of pioneer days are gone from the Till Plain. Trees in the regions now are in farm woodlots, in parks, along the rivers and streams, and in places by the shores of the region’s many lakes.

A bit more than the southern third of Indiana is hill country. The great glaciers rode over the east and west of this region but this was the southern limit of their extent. Here the ice sheets were not as thick or as heavy as where they rode over the northern part of the state. They didn’t level the land as much and left it more rugged, less suitable for agriculture. Still, much of the land was cleared and farms established. But erosion was a major problem.

The glaciers did not cover the center of the southern region of Indiana. Here are the steepest hills in the state, with ravines and bluffs and rock out-croppings. Here is Brown County with its famous fall display of leafy color and Brown County State Park and Lake Monroe, the largest lake in the state, which is an artificial reservoir created by a dam. Farther south is Hoosier National Forest. There are also several state forests.

Brown County State Park is not the only State Park in southern Indiana. There are Clifty Falls, Harmonie, McCormick’s Creek, Shades, Shakamak, Spring Mill, Turkey Run, Versailles, and Whitewater. Each was made a park because of rugged terrain or scenic beauty or both.

The southern boundary of the state, the line between Indiana and Kentucky, is the Ohio River. Historically this region featured low falls and rapids and great bluffs. Along this river, and along the lower part of the Wabash, were extensive cypress swamps. Here, it is said, wood ducks nested in large numbers. There were huge rookeries of herons, egrets, and double-crested cormorants. In winter there were flocks of mallards and other ducks.

As with the wetlands and the prairie of the northwest, only remnants of the cypress swamps are left. Even in those remnants, many of the trees were cut. Stumps of the great trees, some of bald cypress 16 feet across, are reminders of what the forests used to be.

But not all of Indiana’s abundant natural beauty is gone. Pieces of the original ecoregions of Indiana remain in state parks and forests and in fish and wildlife areas and nature preserves. The Nature Conservancy and ACRES, an organization based in Fort Wayne, and other groups have acquired some natural areas. Friends of the Limberlost are reestablishing flooding of some of the swampland that Gene Stratton-Porter described. There is Hoosier National Forest. There are the three National Wildlife Refuges where natural areas are being preserved or reestablished. There is Dunes National Lakeshore on Lake Michigan.

Eighty-seven percent of Indiana was originally covered by deciduous forest. One pioneer who left an account of crossing the state described a feeling of confinement that dampened the spirits as they traveled through the forest. Today less than five percent of the state is covered by forest. Instead of a vast stand of trees, now, except in larger tracts in Hoosier National Forest and several state forests, wooded areas are small plots.

Over 80 percent of the original wetlands of Indiana, including many small lakes, were drained. But more lakes have been created. The largest lakes in the state now are artificial reservoirs created by dams, such as Monroe, Brookville, Patoka, Mississinewa, Salamonie, J. Edward Roush.

Though only bits of the original cover of Indiana remain, the topography is largely the same except for drainage projects and reservoirs and development. But the ecoregions are now areas created by development. There are agricultural areas where there were forest and wetland and prairie. Corn and soybeans and wheat grow in summer, and the fields are barren in winter. There are urban areas and cities. Around many of the lakes are houses and cottages.

Yet there are still birds and other animals in spring and summer, fall, and winter. While some species of birds have declined, some have increased. Robins and cardinals and eastern meadowlarks are undoubtedly more numerous now than in pioneer days. There are starlings, house sparrows, and house finches. Sandhill cranes now nest in the state again. Bald eagles, wild turkeys, peregrine falcons, and white-tailed deer have been successfully reestablished and nest once more in the state. A program to establish Canada geese in the state has succeeded, maybe too well for some people.

People go to Brown County in Indiana for fall color and to the state parks for scenery, but not the spectacular scenery one finds in some state and national parks. The variety of terrain and cover, however, provides habitats for many bird species. Indiana’s location as a crossroads in the east-central part of the United States makes it a place where bird watchers can see the common eastern and midwestern species, plus northern, southern, and a few western species. And there’s always the chance of seeing a rare bird, such as a Pacific loon or a jaeger or even a magnificent frigatebird, far out of its normal range. 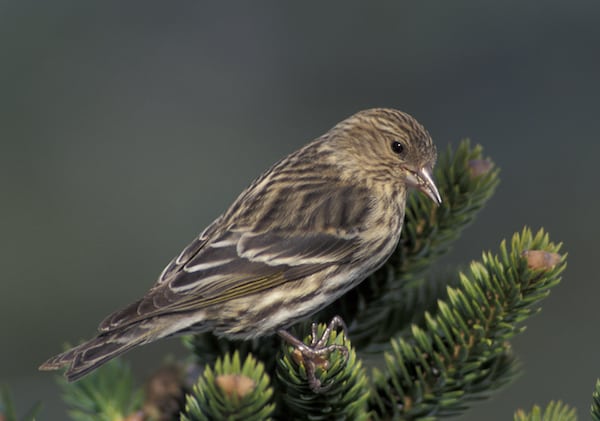 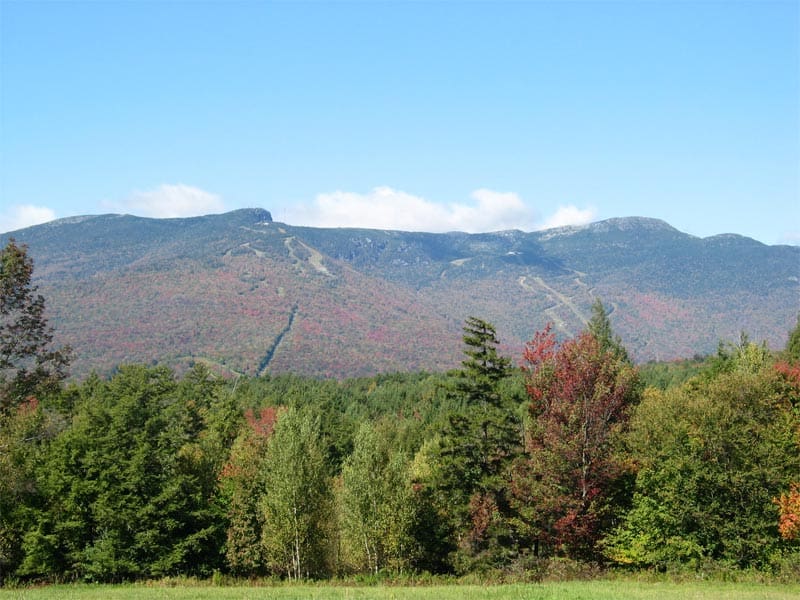 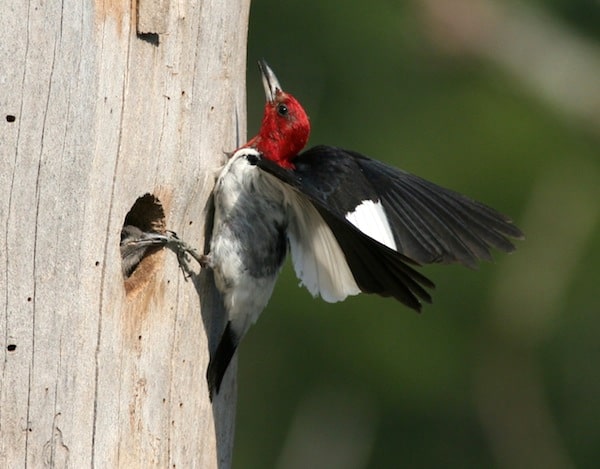