The experience in the mountains was not new to me. I had hiked and climbed nearly 20 peaks exceeding 14,000 feet, and every climb had been exciting, with the rugged landscape of the Rocky Mountains serving as backdrop. In Colorado, climbing all 55 “fourteeners,” as they are known, has become the goal of many budding mountaineers. I harbor hopes to reach the tops of all of them, eventually. My personal exploits in the mountains occurred well before I truly paid attention to birds, before I carried binoculars in my car or swerved at 60 mph trying to identify a hawk sailing over the freeway, and well before my ears were tuned to chips and trills.

Yet, I was not completely wildlife-blind in years past. I recall nervous yellow-bellied marmots scurrying on talus slopes and an especially tame mountain goat that would visit my tent in the mornings, but I remember no birds. The only sighting that is fixed in my mind occurred while hiking to base camp in the dramatic Sangre de Cristo Range of southern Colorado. Halting on the trail, breathing desperately under a heavy pack, I glimpsed a largish dark gray chicken strutting among stately firs. At the time, I was surprised to spot a chickenlike bird, which I identified a few years later as a dusky grouse, at 10,000 feet.

Hundreds of hours of hiking, and that was the only memory of anything feathered. Does bird life stop above the tree line? Are the alpine landscapes of rock and snow simply too harsh for any bird species to thrive? Maybe I had been completely unaware, breathing hard, schlepping my leaden limbs up steep slopes, and more concerned with reaching the summit.

During recent travels to Colorado, where I officially claimed dusky grouse for my life list, I found myself with a spare day and the chance for a little experiment. Although I wasn’t in the same shape as I had been, when I knocked out high peaks literally before lunch, I had acclimatized enough to tackle one of the easier peaks in the San Juan Range of southwestern Colorado. This particular range is famous among climbers for tough peaks, with plenty of difficult routes and notoriously unstable rock, but Handies Peak, my target, classifies as one of the easier hikes, with less than 3,000 feet elevation gain from the trailhead.

In late summer, it is important to commence climbs as early in the morning as possible, in order to avoid possible thunderstorms that often brew above the peaks in the afternoon. Nevertheless, I found myself still stocking up on cookies and jerky at 8 a.m. I was definitely out of practice. The clerk in Lake City looked a little concerned when I told him my plans. “Better leave now,” he said. I replied that I was being spontaneous, but I did hurry. The next hurdle was the rough road to the trailhead. Steep drop-offs and enormous potholes followed by bulging rocks designed for a fun adventure in a jeep slowed me down to barely 2 mph in my sedan. I drove as far as I could without leaving the entire undercarriage on the mountain. I maneuvered into a wide curve in the road, parked, and decided to hike from there.

I was already at 11,000 feet, just at tree line, the air crisp and thin. I loaded my pack with water, calories, and warm clothes. To the southwest, I spotted the top of Handies Peak: 14,048 feet, but achievable. Within minutes, I realized that birds were not absent from these altitudes, at least not in August, and realized that in the past I just had not paid proper attention. Flocks of American robins, with many young of the year, took flight from the lush tundra. Groups of white-crowned sparrows foraged on the ground, methodically picking seeds among fading wildflowers.

I reached the end of the four-wheel track, where all the able vehicles parked, and continued along a narrow path slicing through the alpine tundra. Taking my time, I stopped to scan through the flocks of birds, which spilled like feathered waves across the low greenery. This offered a chance to add dark-eyed junco to the list and for my heart and lungs to find a rhythm that could sustain me for the next three miles to the top.

A Wilson’s warbler sallied from an outsized boulder, snatching insects from the warming air. The bird probably bred in one of the streamside thickets nearby. Crossing a low stream, I caught a glimpse of a Lincoln’s sparrow flushing from hip-high alders. The bird responded to squeaking much like they do on their wintering grounds, popping up barely within view. I carried on, with my trekking poles clicking on the rocky trail. I had not even covered a mile and had already recorded more species than I had noted during hundreds of miles on previous climbs.

The route swung into a steep valley, and the walking became strenuous. Across the valley, talus and scree slopes tumbled from craggy peaks above. I could hear the calls of brown-capped rosy-finches, sounding much like house sparrows, emanating from the cliffs. I decided to stay on track, trying to balance the chance to reach the top with birding. Fortunately, when I approached the saddle on Handies Peak’s south ridge, rosy-finches were common. A dozen birds, including juveniles, foraged on the ground, presumably searching for windblown seeds on bare soil. A handful of birds would fly and circle, only to land again. Abandoning the trail now and moving quite slowly, I was able to closely approach the confiding birds. Brown-capped rosy-finches descend to lower elevations in winter, where they swarm feeders in ski resorts and towns tucked into the mountains and can often be studied at close range from the warmth and comfort of a living room.

Watching the finches on their breeding grounds was something special, though. And they weren’t the only species favoring the weathered tundra. The call of American pipits drifted across the open grounds. Common ravens circled the summit that now loomed directly above. The trail steepened, but the chance to spot white-tailed ptarmigan, a true high-elevation specialty in Colorado, made the going a little easier. White-tailed ptarmigans breed in the alpine tundra, where they crouch in mottled grays and browns amid the low growth. Perfectly camouflaged, even close birds are often not detected until they move, sometimes right underfoot. Even during winter, the species remains at high elevations. With a nonbreeding plumage of pure white, the birds are tough to find any time of year. I was not fortuitous enough to chance upon one of these cryptic birds, but the habitat looked perfect.

I paused atop the saddle, a gentle low point between two peaks, and ate a simple lunch of jerky and cookies. It is important to go slow and allow time for acclimatization at these elevations, especially within the final ascent, to avoid altitude sickness: headache and nausea. I walked carefully not by choice, but to allow my lungs to catch up with the rest of my body. Near the barren summit, I spotted one more rosy-finch before reaching the top. Mountains stretched to all horizons. Far below, I could see forest crawling to the tree line in valleys before giving way to tundra. Only a few dirty patches of snow clung to the shady north slopes this late in the season, and the quintessential alpine lake, emerald blue, lay in view to the west.

The weather held. With only a few tame clouds disturbing the deep blue sky, I lingered. During the descent, which can be tougher than the climb, I added a few species to the list for the day. I veered off trail and followed a stream for a short distance and quickly found an American dipper, bopping up and down on a midstream rock. I watched it dive into miniature rapids a few times before it flew downstream. Among the hordes of sparrows, I picked out a slender Brewer’s, and a troop of pine siskins took advantage of the few seeding flowers.

Among the numerous peaks I have climbed, this particular summit remains one of the most memorable. The birds gave me a greater appreciation of these mountains. I noticed the subtle changes in habitat from the protected streambeds to the windblown ridges. I spent more time watching the pikas, already preoccupied with gathering stores for the long winter, only occasionally uttering their sharp whistles. I marveled at the rosy-finches thriving in this harsh environment.

On the way up or down the mountain, a stop below tree line, where tall fir and spruce dominate, is always worthwhile. This habitat offers the chance to boost the list with red crossbill, pine grosbeak, gray jay, northern goshawk, and many other mountain birds. Take a break at any lake to scan for waterfowl and enjoy the scenery. A drive along some of the quieter gravel roads within coniferous forest may reward the patient bird watcher with a dusky grouse crossing the road. The hours right after sunrise or just before sunset offer the best chances.

If hiking a mountain doesn’t sound appealing, Mt. Evans in the Front Range has long been popular among birders and armchair mountaineers alike. It offers access to alpine habitat of the high peaks via a road that leads all the way to the 14,264-foot summit, essentially harboring the same specialties. With more than 50 peaks above 14,000 feet in Colorado, there are plenty of high-altitude birding adventures to be had. So, add binoculars to your backpack and let us know what you see up top. 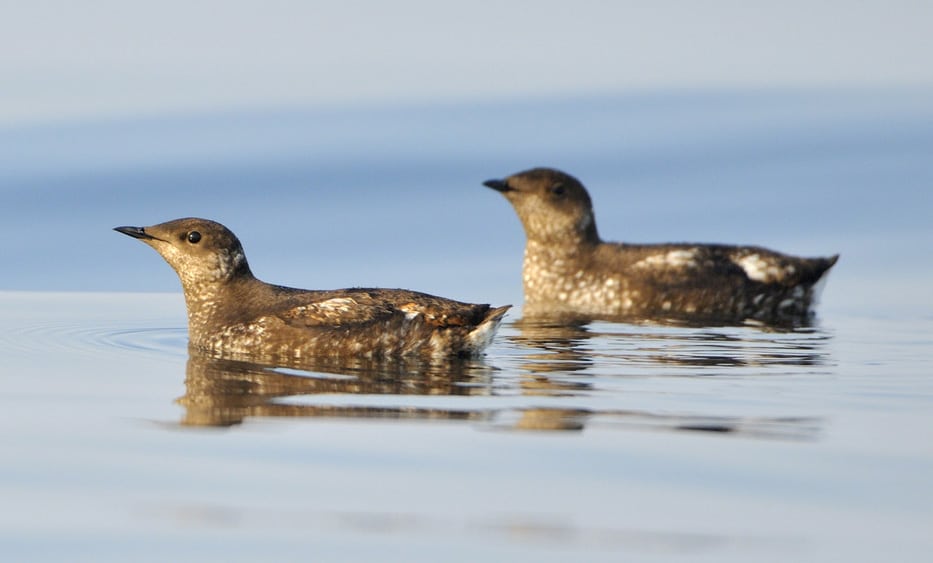