“Who will love a little Sparrow / Who’s travelled far and cries for rest?”

It’s that time of year when this Simon & Garfunkel lyric pops into my head, and my eyes start combing the backyard in search of newly arrived sparrow visitors—here in the Midwest, that means dark-eyed juncos, white-throated sparrows, and song sparrows for the most part, with the occasional white-crowned sparrow, eastern towhee, and even a fox sparrow or two.

Sparrows are most likely to visit backyards—usually under bird feeders or on ground-level platforms—in fall and winter. There is a caveat to this, of course, across our diverse continent: For folks who live in, say, Canada or Montana, some sparrow species are more likely to be found there in summer, where they breed.

Some of the ones in my yard and south of here have left areas north and are showing up in their wintering territories. Some places in the US have fewer sparrows now, and others have cold-weather sparrows that depart in spring.

There are around 35 sparrow species in North America, with about half of them likely to visit backyards at various locations across the continent. Some are common, but some are especially exciting to find on or under your feeders. Look for these sparrows in your yard:

House sparrow – An Old-World sparrow, a distant cousin to the others on this list and probably the one most familiar to humans; it visits suet, hopper, and even tube feeders as well as feeding on the ground. It is a year-round resident across all of North America—except in the far North. (House sparrow photo by Creative Commons)

Towhees – Spotted (breeds throughout the West, but leaves northern plains nesting areas to winter in the Southwest); eastern (breeds throughout the East, but leaves the upper Midwest and New England to winter in the lower Midwest and Southeast); California, canyon, and Abert’s are year-round residents of limited ranges in California and the arid Southwest, all regular backyard visitors, dining on ground-level seed. (Spotted Towhee photo by naturespicsonline.com via Wiki Commons.)

American tree sparrow – Breeds in northern Canada and Alaska; winters in northern and central US as far south as Arizona, Texas, and Alabama. Visits backyards occasionally to visit hopper and platform feeders, or to pick up spilled seeds. (American Tree Sparrow by Shutterstock.)

Field sparrow – Widespread in the eastern US, northern populations from the upper Midwest to New England winter in the Southeast. It occasionally visits hopper or platform bird feeders and the ground under them. (Field sparrow photo by A. Reago and C. McClarren / Wikimedia.)

Chipping sparrow – Departs most of its breeding territory across northern and central North America to winter in southern tier of states, Central America, and Cuba. It overwinters in southern areas of its breeding range. It occasionally visits platform or hopper feeders or the ground beneath them. (Chipping Sparrow photo by Creative Commons.)

Fox sparrow – Departs northern breeding areas to nest along the Pacific coast, southern Arizona, and from the lower Midwest to central Texas and northern Florida. Look for it on platform feeders, under your feeders, or skulking in underbrush. (Fox Sparrow photo by Creative Commons.)

Song sparrow – Nests across most of North America except northern Alaska and northern Canada. Departs northern breeding areas to winter across most of the Lower 48. It frequently visits backyards, especially under bird feeders, and often uses platform feeders. (Song Sparrow photo by Creative Commons.)

Dark-eyed junco – Juncos that nest across Canada winter across the Lower 48; some populations are resident along the Pacific coast, in New England, the high-elevation Appalachians, and elsewhere. They commonly visit yards, especially those that offer birdseed. They naturally feed on the ground but will visit hanging feeders, especially platforms. (Dark-eyed Junco photo by Bill Thompson, III.)

Harris’s sparrow – Nests in the Canadian arctic, but winters in the central tier of US states. Vagrants outside that range regularly show up at ground-level seed piles, thrilling those who spot them. (Harris’s Sparrow photo by Andy Reago & Chrissy McClarren via Wiki Commons.)

White-crowned sparrow – Departs breeding grounds in Alaska and arctic and western Canada to winter throughout Mexico and the southern half of the US; Pacific coast and some interior western populations are year-round residents. They occasionally turn up in backyards, partaking of spilled seeds on the ground. (White-crowned sparrow photo by Tim/Wikimedia Creative Commons.)

Golden-crowned sparrow – Departs its breeding territory throughout Alaska and western Canada to winter along the Pacific coast. While most comfortable feeding on the ground or platform feeders, they might also nibble on your garden crops! (Golden-crowned Sparrow photo by National Park Service, Alaska Region.)

• White-throated sparrow – Found in Northeast year-round, those that breed across Canada and the northern tier of states winter along the Pacific coast, and in the southeastern half of the US, from New England, across the lower Midwest, to southeastern Arizona, as far south as South Texas and northern Florida. A fan of forests, those with yards within or abutting woodlots are likely to spot them on or under platform feeders. (White-throated sparrow photo by Shutterstock.)

To learn more about these and other less widespread sparrows, visit our Sparrows & Allies Bird Identification page. 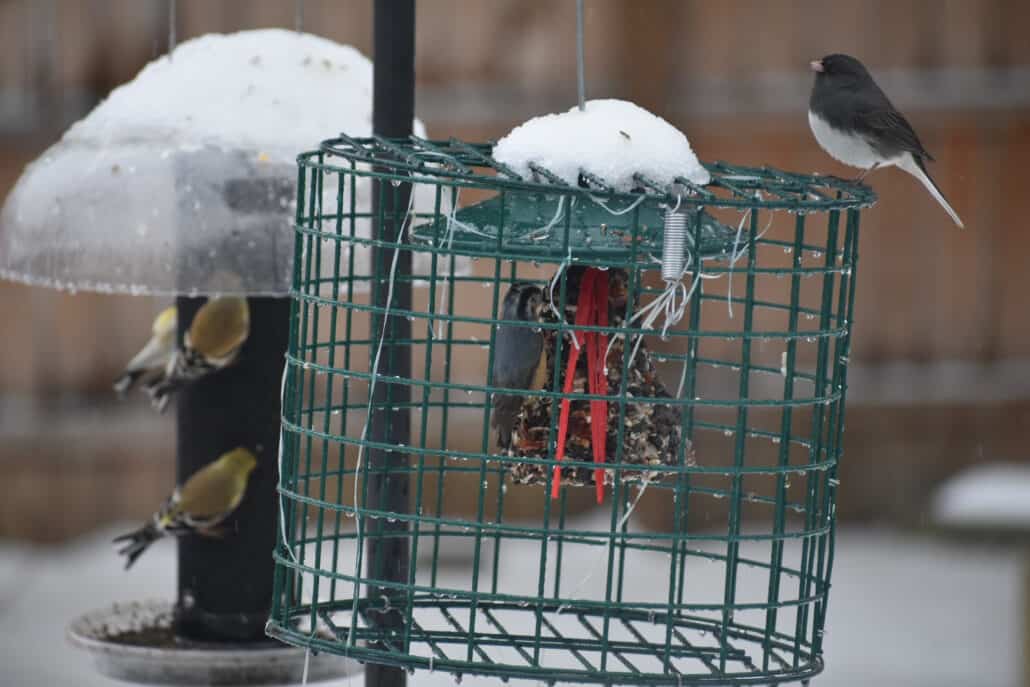 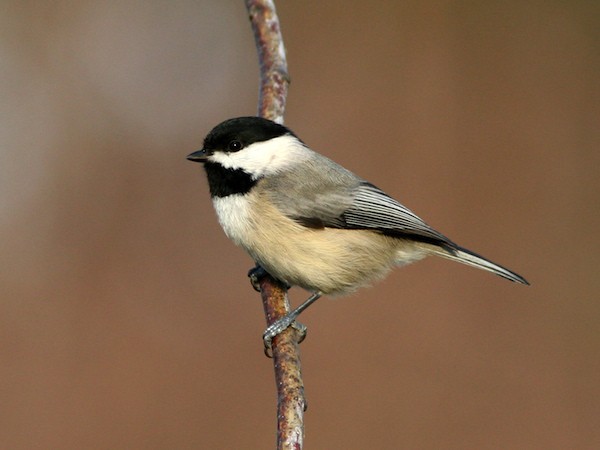 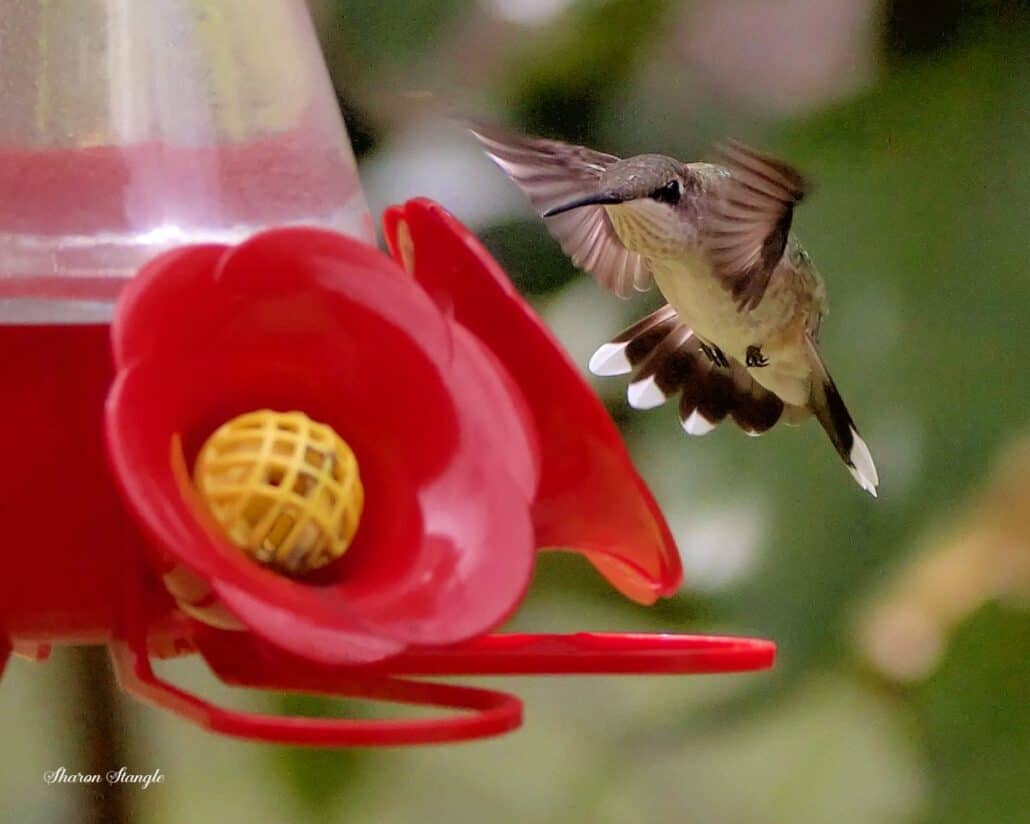