Located in Michigan’s eastern Upper Peninsula, the Whitefish Point area is famous throughout the Upper Midwest for its impressive waterbird migrations, as well as its proven attraction as a vagrant trap. In spring and fall, significant flights of loons, grebes, and ducks including scoters and long-tailed ducks, can be observed from the beach at the tip of the point near the waterbird shack. Especially in fall, there may be no better place in the state for seeing migrant jaegers.

In spring, hawks migrate along the point with a highlight in April being the numbers of rough-legged hawks. Owls also use this area during migration, and Whitefish Point is one of the better sites in the state for migrating northern saw-whet and long-eared owls, and for rare irruptives including boreal, great gray, and Northern hawk owls.

Numerous songbirds also migrate along the point, and the bird checklist for the area exceeds 300 species. Nearby patches of boreal forest hold other resident species of interest, including spruce grouse, black-backed woodpecker, gray jay, and boreal chickadee. In many winters pine grosbeaks, red and white-winged crossbills, common redpolls, pine siskins, and evening grosbeaks can be found in the area.

This is the primary site where trumpeter swans were introduced into Michigan, and the state’s largest breeding population is found here. Boreal habitats are home to black-backed woodpeckers, gray jays, and boreal chickadees, and in 2004 the state’s first confirmed great gray owl was found. In the grassland areas sharp-tailed grouse can be found in early May.

The main vehicle access is from the seven-mile Marshland Drive, where many migrant and breeding water birds can be seen, including common loons, American bitterns, and sandhill cranes. The 1.4 mile Pine Ridge Nature Trail passes through wetland and forested habitats where a variety of breeding warblers, vireos, thrushes, and sparrows may be found. Evening tours are operated to see the elusive yellow rails in May.

The warblers nest in low vegetation among the large white pines in the dune areas, especially near Good Harbor Bay. The plovers nest along the protected, uninhabited beaches (a scarce commodity in this well populated state), particularly near the mouth of the Platte River.

Other areas of mixed deciduous and coniferous woodlands are breeding areas for warblers, tanagers, and flycatchers, and in migration nearly any patch of vegetation can support migrants refueling to continue their migrations northward or southward. Bald eagles and common loons also nest in some areas of the park.

The Kirtland’s warbler breeds mainly in a few counties in north-central Michigan, primarily in the Huron-Manistee National Forest. The easiest way to see a Kirtland’s warbler is on a tour, where there are two options. The U.S. Forest Service runs tours (for a nominal fee) out of Mio, and the U.S. Fish & Wildlife Service runs tours out of Grayling.

In addition to being taken to an area where up-close sightings are virtually guaranteed, both tours provide interesting introductory programs on the natural history and conservation of this most unique of Michigan’s birds. Other species likely to be seen on these tours include upland sandpiper, black-billed cuckoo, eastern bluebird, brown thrasher, Nashville and black-and-white warblers, clay-colored, field, vesper, and Lincoln’s sparrows, and Brewer’s blackbird.

Finding a Kirtland’s warbler on your own is possible by driving the numerous forest service roads in the area. Do not enter any areas posted as being closed and stay on the road. Do not play tapes of the bird’s song or let pets wander into the breeding area. Do not disturb these endangered birds in any way.

Michigan’s most reliable breeding colony of yellow-headed blackbirds, a species typically found farther west, can be found here in spring and summer. A pair of bald eagles has nested in the area. Songbirds that can be found nesting in the marshes and adjacent areas include marsh and sedge wrens, yellow warbler, common yellowthroat, and song and swamp sparrows.

With the varying lake levels, emergent marsh vegetation, and mudflats, migrant shorebirds and waterfowl can often be found from spring through fall. The area has also attracted its fair share of rarities.

Wastewater treatment facilities, sometimes called sewage ponds, may seem to be an unusual bird watching destination. But waterbirds, including ducks, shorebirds, herons, and gulls are often found in considerable numbers. It may be fair to say that if you haven’t visited a sewage pond, you haven’t been birding! The Muskegon Wastewater System is Michigan’s largest, and perhaps is one of the largest in the U.S., with 11,000 acres of settling ponds, surrounded by open fields.

In migration, large numbers of waterfowl, especially northern shovelers and ruddy ducks, can be found in the ponds. The muddy edges along the diked roads running between ponds attract migrant shorebirds. Rarities are found annually. In summer, this area has been the most reliable spot for finding eared frebes, rare in the state, and in late fall and winter the diked roads have attracted snowy owls and snow buntings, and, rarely a gyrfalcon.

The adjacent fields are a good place to look for rough-legged hawk, American golden-plover, black-bellied plover, horned larks, American pipits, Lapland longspurs, and snow buntings. Some years a golden eagle may join one or two bald eagles, which feed on the abundant waterfowl. A permit, available at the Administration building Monday through Friday, is necessary to drive on the diked roads here. Permits can be obtained in advance by telephoning.

Covering more than 50,000 acres of deciduous woodland, farmland, marshes, swamp, and riparian woodland along the Kalamazoo River, the Allegan State Game Area provides a great diversity of birding opportunities. Numbers of waterfowl, including Canada geese and snow geese, use the open fields from fall through spring.

In winter raptors use the area, including bald and golden (occasional) eagles, northern harrier, and red-tailed and rough-legged hawks. At these times birding is mainly from the roads, though there are a number of hiking trails that permit access to the woodlands. Some areas are posted as closed to protect wildlife, and these should be strictly obeyed.

In summer, an interesting diversity of breeding species can be found. Of particular note is the Kalamazoo River, which can be birded by canoe. Perhaps the state’s healthiest population of prothonotary warbler is found along the river, in addition to good numbers of yellow-billed cuckoo, Acadian flycatcher, red-eyed vireo, blue-gray gnatcatcher, cerulean warbler, American redstart, and many others.

After the migrant warblers have passed through southeastern Michigan, many local birders head up to the Port Huron State Game Area in early June. The reason is the interesting mix of breeding warblers, with both northern and southern affinities, that includes 16 regularly occurring and 9 less than annually occurring species.

Four species of vireos and four Empidonax flycatchers are regularly seen in summer, and this is also a regular area for both black-billed and yellow-billed cuckoo. Recently, sandhill cranes have summered, along with the more regular sora and Virginia rails.

This is one of the top bird-watching sites in Michigan, consisting of more than six square miles of marsh and diked ponds managed for breeding waterfowl. Abundant waterfowl and shorebird migrations are the main attraction here, and rarities are found annually. The area’s attraction to shorebirds varies from year to year, as water levels are dependent on those of adjacent Lake Erie.

Large stands of cattail marsh provide breeding habitat for American and least bitterns, sora and Virginia rails, American coot, common moorhen, marsh wren, common yellowthroat, and swamp sparrow. Great blue herons and great egrets breed on islands in the area, and black-crowned night-herons and green herons are seen regularly. The extensive wetlands provide habitat for a number of waterfowl to linger into summer, some of which breed here far from their normal ranges farther north.

Northern shoveler, Redhead, Greater Scaup, Lesser Scaup, common goldeneye, and ruddy duck can be found in summer in most years. The area is closed to all entry, except for waterfowl hunting, from September through November.

Lake Erie Metropark is one of the premier fall hawk-watching sites in all of North America. Each fall, more than 100,000 broad-winged hawks (occasionally 500,000-plus) pass over the park as they cross over the Detroit River from Ontario, Canada to the east. An additional 15 species are counted here annually, including more than 25,000 turkey vultures, several hundred northern harriers, several thousand sharp-shinned hawks and red-tailed hawks, and more than 1,000 American kestrels.

Smaller numbers of other species, ranging from tens to hundreds, are tallied for osprey, bald eagle, Cooper’s, red-shouldered, and rough-legged hawks, merlin, and peregrine falcon. This is perhaps the best site in eastern North America to see golden eagles in late October through November, when 100-plus are counted annually. Swainson’s hawk, a rarity anywhere in the East, is recorded here annually in small numbers (1 to 12) each fall.

The best weather conditions for hawk migrations are on days with North or Northwest winds following a cold front. The main site for watching this spectacle is the boat launch, though if winds are strong out of the north the count site is moved about 2 miles south to the headquarters of Pte. Mouillee State Game Area. Additional details about the hawk migration can be found at the website of Southeastern Michigan Raptor Research (www.smrr.net).

Other attractions here include migrant songbirds in the woodlands and along trails behind the Marshlands Museum, and migrant and wintering waterfowl; 24 species of waterfowl are typically reported annually. More than 20,000 canvasbacks have been found in late fall, and more than 1,000 tundra swans have overwintered on Lake Erie offshore of the park in recent years. 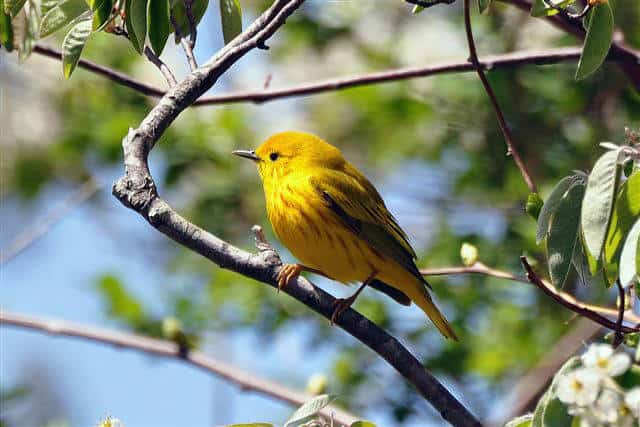 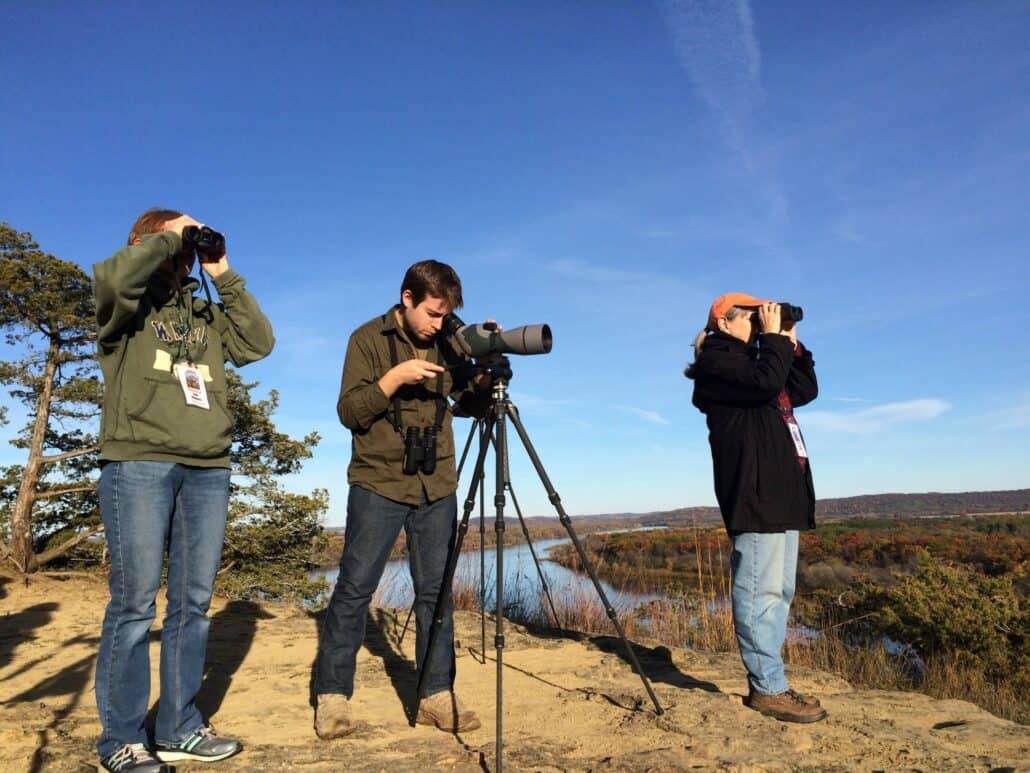