Welcome to Missouri, the “Show me State,” and to a great range of birding opportunities. Few states offer the wide variety of bird life found in Missouri at all seasons.

The state is blessed with tremendous migrations in both spring and autumn, with a world of opportunities for the backyard birder and those who love to watch bird feeders from the conform of their homes at any time of the year. Missouri is a state where visiting birders can enjoy the birds of the prairies and the southwest – scissor-tailed flycatcher, prairie chicken, western kingbird, yellow-headed blackbird, great-tailed grackle, greater roadrunner, and painted bunting; the birds of the south – black vulture, fish crow, black-necked stilt, swainson’s warbler and bachman’s sparrow.

It is a major stopover for migrating waterfowl with up to half a mission geese on the state’s three national wildlife refuges on any late November or early December day; where waves of warblers pass through in both spring and fall migrations; where shorebirds congregate, prairie chickens boom, hawks kettle, roadrunners run and bald eagles draw big crowds on winter eagle days.

Missouri is a state where unglaciated prairies blend with 350 million-year-old Ozarks give way to the Mississippi Lowlands, where the prairies meet the glaciated plains of the north, and two of the nation’s great rivers- the Missouri and the Mississippi dominate the state’s mid-section and both the eastern and upper western boundaries.

Missouri is blessed with tremendous migrations in both spring and autumn, with a world of opportunities for the backyard birder and those who love to watch bird feeders from the conform of their homes at any time of the year.

Missouri is blessed with a combination of permanent residents, seasonal nesters, and over-wintering guests along with waves of migrants which makes feeding birds almost as thrilling as field trips, without the ticks, mosquitoes, flies, brambles, cockleburs, sandburs, snakes, and humid, windy, frigid winters for which Missouri is famous.

Missouri is blessed with no less than five natural communities offering diversity, not only of bird life, but of trees, geology, fish, wildflowers, grasses and both animals and reptiles.

Missouri is also blessed with a rich history, a solid political base supporting conservation, the environment and the birds; a population willing to tax itself as proof of that love for its natural history; and a state Audubon Society more than 100 years old which takes care of the birders; needs from an annotated check list to a state records committee, a bird-finding guide, an on-line hotline and list-serve, a quarterly publication, and a volunteer force happy to show the visiting or the beginning birder every productive nook and cranny in the state.

Missouri’s avian history began, appropriately, with the Lewis and Clark expedition in 1804.  Bird life along the Missouri River in the state was noted, but it would be another 15 years before a trained ornithologist came to make observations.  Thomas Say, whose name appears on such birds as say’s phoebe, was the first.

Others would follow, but it would be a German immigrant named Otto Widmann who would become the authority for Missouri ornithology for half a century beginning in the 1870’s.

Widmann found his way to St. Louis after stops in New Jersey, Georgia and New Orleans to become the proprietor of a pharmaceutical business, spending his spare time studying Missouri’s bird life.

In 1884, he was selected to the American Ornithologists; Union and five years later, suffering from ill health, he retired from the drug business at age 48, but not from his passion for ornithology.  He was already considered to be Missouri’s leading authority on matters avian, often published in The Auk, the AOU’S journal, as well as other publications.

In 1907, he wrote Missouri’s first comprehensive study of Missouri’s birds, “A Preliminary Catalog of the Birds of Missouri,” published by the Academy of Science in St. Louis.

His “Catalog” would be the only statewide survey of the state’s bird life until “Birds of Missouri” updated and expanded Missouri’s bird history in 1992.

The authors were Dr. David Easterla of Northwest Missouri State University and Mark Robbins, then the Collections Manager of Ornithology at the Academy of Sciences in Philadelphia and a long-time Missourian.

In 1997, the Missouri Department of Conservation released “The Breeding Bird Atlas” compiled between 1986-92 and edited by Brad Jacobs and State Ornithologist James D. Wilson.

In 2001, the Department of Conservation published Jacobs’ “Birds of Missouri,” and illustrated field guide for 355 of the 398 species recorded in Missouri.

This trio forms the statewide library for those interested in Missouri’s birds – pas, present, and future.  Add the Audubon Society of Missouri’s “Finding Birds in Missouri” and your library is complete.

Missouri took the lead nationally in avian conservation because of Widmann and other fellow St. Louisans.  He was one of 13 men who formed the Audubon Society of Missouri in 1901.  The Society remains a major player as the 21st Century unfolds.

In the beginning, it drew together the state’s biologists and addressed the concerns of the destruction of bird life in general.  Birding, as we know it today was seldom mentioned, but no doubt practiced often.

As members of the Society aged, the ASM faltered.  Widmann did not renew his membership after 1924 and when he died, at age 92, in 1933, it seemed that the ASM had died with him.

Professor Rudolf Bennitt, a biologist and birder at the University of Missouri in Columbia, revived the Society, in 1934, established “The Bluebird” as the Society’s official publication, and set the organization on a course which weathered a few

rugh spots in the 1960’s and ‘70’s, but today is the engine which drives much of what happens in Missouri’s birding circles.

The Audubon Society of Missouri

The ASM published the first statewide bird-finding guide for Missouri in 1993 and it was so popular it required a second printing.  The guide was revised in 2001 and remains the only statewide “where are they and how do I get there” birding guide.

The Society maintains a hot-line service on-line.  Need to find a rarity go to www.mobirds.org

The Society published the state’s only annotated statewide checklist in 1967 and has updated it five times, most recently in 2004.  The Society also formed the state’s bird records committee in 1987, has published “the Bluebird,” its quarterly journal since 1934; has coordinated the seasonal surveys for the state since 1962; has edited the state’s Christmas Bird Counts since 1982; and has been the catalyst for Audubon Missouri, a confederation of a number of groups active in the political struggles to keep the avian populations intact.

The ASM, many years ago, gave birth to a numerous local Audubon societies, nature groups and bird clubs.  Today, these local groups have strong memberships and intimate knowledge of local species and hot spots and are the go-to organizations around the state.

Missouri has been a state blessed with leadership in both education and field work.  Otto Widmann built the foundation, Rudolf Bennitt built upon the foundation, and when he died in 1950, his role in ornithological education was assumed by Bill Elder, who taught birds and birding at the University of Missouri for 40 years.

Among Dr. Elder’s many students was a farm kid from Versailles, Mo., named Dave Easterla.  Dave went on to become a field ornithologist and biology professor at Northwest Missouri State University, served as president of the ASM and as a member of its board of directors for 32 years (1973 – 2004), and is a co-author of “The Birds of Missouri.”

Paul Bauer extended the legacy of Otto Widmann, leading the St. Louis Audubon Society, the Webster Groves Nature Study Society and the ASM as president and serving on the ASM borard for 26 years.  He led many field trips around the world and co-authored “The Birds of St. Louis.”

St. Louisan Phoebe Snetsinger, who died on a birding trip in Madagascar in 1999, logged over 8,400 species on the world’s longest personal list ever – 85 percent of the world’s birds.

For the bird lister, the casual nature observer, the professional ornithologist, the prairie lover, the deer and goose hunter, the wildflower aficionado, the photographer, the baseball fan who loves the Cardinals, and the parents who want to teach their children about the wonders of nature – Missouri has it all.

Today, as it has been forever, many of the most knowledgeable birders are older and no longer able to walk for miles through rough country, jumping streams, scaling cliffs, climbing trees, packing heavy cameras and/or backpacks, willing to ignore the elements to see what there was to see.

Your author has had both knees; both hips and the right shoulder totally replaced and are half deaf from blowing a shrill whistle for 40 years as a football and basketball official.  His ability to walk for an hour through rough country is pretty much history, but his desire to bird remains strong.  His hearing recognizes crows, cuckoos, nuthatches, and blue jays and little else.

So what does such a modified birder do to pursue his hobby?  He adjusts and uses his car as a rolling blind.  He keeps records seen from a car; he plans ahead to see as much as he can see by walking the least steps; he takes Christmas Count assignments that fit his

Current role as a birder; he learns to bird by silhouette from a car at 70 mph; he learns to find ways across four strands of barbed wire; he birds by movement, not sound.

Most national wildlife refuges have motor routes, open to both the public and by special permission.  Many will open their gates upon request.  Your taxes pay the refuge bills, so get a return on your taxes: give your local refuge a call.

Drive county roads and bird the wires and fence tops.  They’re usually highly productive.  Use your car flashers and a sign in your window to identify you as a birder.

Drive the country back roads and bird the fencerows and brush piles.  They are particularly productive in the winter.  Let 5 mph be your top speed.

Work on your “pish” to use along those country roads.  Most of the sparrows and woodland birds will visit a good “pish.”

Call the local Audubon society in the many areas listed in the “Resources” section and explain your limitations.  You’ll probably have a group happy to either join you or include you in their day.

With a slower pace and limited range comes patience.  With patience often comes success.  Your car becomes an excellent blind.  Birds adjust to the car quickly.  Move slowly and quietly as you raise your binoculars and the birds will pay you little attention.

Turn your engine off.  Even the smoothest running engine has some vibration.

Missouri in the spring can produce 100 species from your car if you choose the right stops.  Keep the bird book and the reading glasses next to you on the car seat, turn off the radio, have the binoculars never more than half and arm’s length away.  Always bird from a totally motionless car and be aware of the traffic behind you.  A thermos of hot tea can help solve the problems of identifying the fall shorebirds, sparrows and warblers.

Accept where you are in life and enjoy every minute – and every bird. 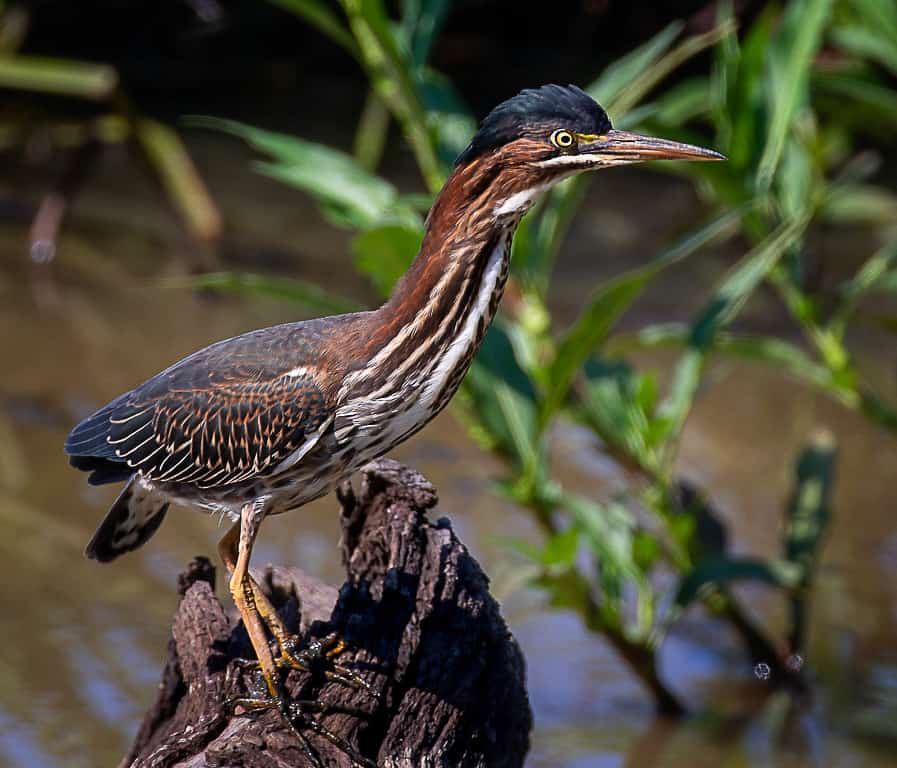 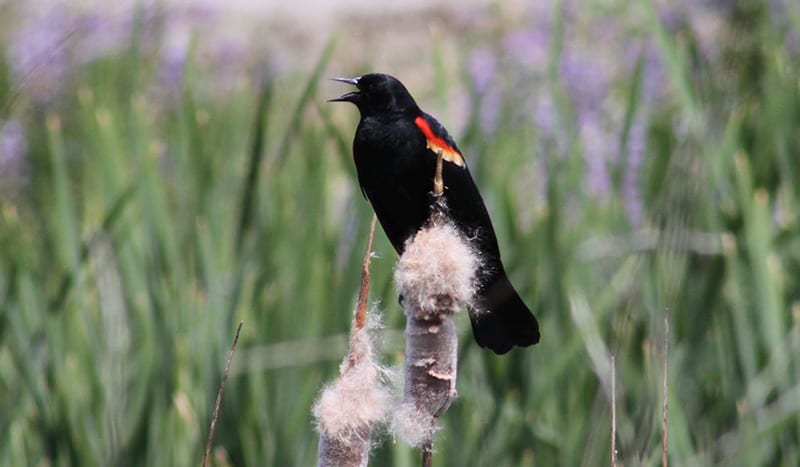 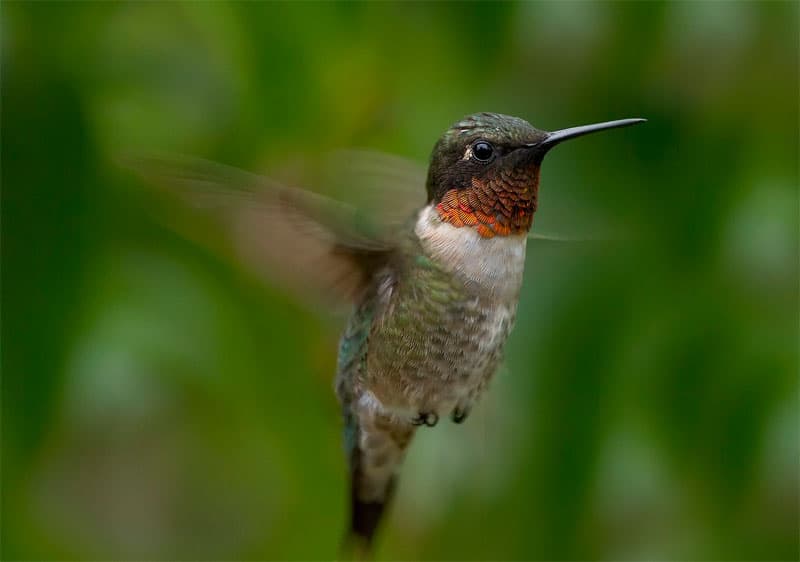