There are more than 800 bird species that occur in continental North America and its adjacent islands. The most recent Checklist of Birds of Mississippi includes almost one-half of them. That’s a lifetime’s worth of birds, and getting to see them, one by one, is a great big adventure.

Watching birds can be anything you wish. Choose your own style of bird watching and do it at your own pace.  Satisfy your own need to know; make it a game, a challenge, a hobby, a pastime, a preoccupation, a mission, an avocation, or a profession.  Expectation spices every day as you seek, find, study, and identify birds, but remember that the ultimate joy of bird watching is in getting to know birds by more than their names or as Xs on a list.

The end of the bird-watching rainbow is nowhere in sight—no one has seen all the birds within the geographical boundaries of this or any other state, and no one has ever learned every fascinating thing there is to know about their lives.

What is known about Mississippi’s bird life was not learned in one fell swoop; it has come in bits and pieces. Early records were supplied during the period when Mississippi was a territory that included Alabama. As pioneer naturalists, botanists, geologists, and historians penetrated the wilderness that would later become this state, birds were a small part of their broader interests. It was the writings of Sir William Dunbar, who had interests in botany, geology, and astronomy, that opened the door. Dunbar lived near Natchez, where Alexander Wilson visited.  Later, in 1810, Wilson wrote an account of the now-extinct Carolina parakeets he had observed there.

Alexander Wilson is known as the “father of North American ornithology.” (Don’t be intimidated by the word ornithology; it is just another word for the study of birds, and it applies to all bird watchers, professional or amateur.) Wilson wrote the first scientific literature on North American birds.  John James Audubon, whose name has been immortalized by the National Audubon Society and whose art and colorful text were major contributions to early ornithology, also looked for birds in Mississippi in the early 1800s. Neither spent much time here but their published works have inspired all whose thirst for knowledge takes them beyond the next bend in the road.

Much of our bird history was obtained by settlers who were also gifted historians, botanists, naturalists, and geographers. Some are well remembered (Reverend Andrew Allison and state geologist Benjamin Wailes published their own bird lists) and some are long forgotten (A. J. Brown described blackbird roosts in “reed-cane brakes;” the birds’ deposits into boggy places became, after the lapse of centuries, “a thing of beauty and profit – the most fruitful sources of corn in the country.”). Bird history is more than a compendium of ornithological tidbits; it is a lesson in Mississippi’s early history as a state.

It is also a sobering lesson in changing bird life. The Carolina parakeet of which Wilson wrote in 1810 became extinct in the early part of the 19th century.  In the mid-1800s John Wesley Monette wrote an account of the now extirpated (and possibly extinct) ivory-billed woodpecker, long before its fate was manifest. Dr. Gideon Lincecum, who founded the city of Columbus and explored the Tombigbee River bottomlands and adjacent western prairie lands, described passing under a roost of passenger pigeons that occupied about 50 square miles of mature upland forest. The last passenger pigeon on earth died in a Cincinnati zoo on September 14, 1914.

In the first decades of the 20th century bird watching in Mississippi was still limited to a few serious bird students. Accumulation of ornithological data took a quantum leap when a state Plant and Animal Survey Project was begun in 1935. Just before mid century popular field guides to birds, with color illustrations, information about habits and habitats, and range maps showing bird distribution came into widespread use. Such guides naturally emphasized the beauty of birds and the joys of watching them and the idea of bird watching as a popular hobby took a firm hold on people from all walks of life.

The Mississippi Ornithological Society was chartered in 1955 and has grown in membership apace with the exponential continent-wide increase in bird watching as more than a scientific pursuit.  MOS is still the linchpin of bird-related activities throughout the state.

By the end of the 20th century, additions to our knowledge were of such proportions, and involved so many professionals and amateurs, so many teachers, students, and rank- and-file bird watchers as to defy any effort to credit certain individuals, however worthy of recognition they may be.

What’s so special about Mississippi?

If Mississippi is to be your own bird-watching fiefdom, you are in a good place; this state has great natural areas and some choice human-made habitats to explore for birds.

Before you rush to do so, there are a few things you should know.  Bird watching means getting out in all seasons.  Be prepared for associated inherent hostilities by wearing proper headgear, outer clothing and footgear, not only for protection from sun and high water, but from other potential threats, such as creatures and critters of various description.  It will benefit you to always wear sun-screen and to have insect repellant at hand.  There are snakes and alligators in this state–though most will scurry away at the first sign of a human, do be cautious while bird watching in their domains.

As a southeastern state, we have a select little group of birds of limited distribution; thus birds such as the mottled duck, swallow-tailed kite, purple gallinule, Wilson’s plover, red-cockaded woodpecker, brown-headed nuthatch, painted bunting, and Bachman’s sparrow are among those “most wanted” by bird watchers from distant states.

Though it has no taiga, tundra, mountains, or tropical islands, Mississippi has attracted an esoteric assortment of species from the extremes of North America and beyond. Brown noddies from the Dry Tortugas have been driven to our shores by hurricanes and tropical storms; a snow bunting from the tundra appeared in a parking lot at Mississippi State University in Starkville; a white-eared hummingbird of Mexican origin spent weeks at a nectar feeder in Gulfport.  To further accentuate the power of flight, a citrine wagtail, the only one ever seen in the western hemisphere, drew a crowd to a humble sewage pond in north Mississippi.

We have four changes of season and birds appropriate to each–loons, waterfowl, raptors and sparrows in winter, transient shorebirds and passerines in spring and fall, and a colorful array of songbirds joining permanent residents for the summer nesting season.  As an extra added attraction, the coastal counties and barrier islands are the landfall and staging areas for a vast number of trans-gulf migrants each spring and fall. Being in the right place at the right time to witness a migration phenomenon known as a fall-out can happen to any birder, even a rank beginner

Eleven hummingbird species have been documented within the state; that’s incredible but true. Wintering hummingbirds are of fairly recent record, but the chance of playing host to an off-course hummingbird has hundreds of takers who tend their winter blooming gardens with great care. Clearly, there are no dull days for a Mississippi bird watcher.

The excitement and frustration levels that all birders deal with at one time or another rise higher for the beginner, for whom almost any bird will be new and possibly confusing. Putting names to birds is something that all bird watchers struggle with.  One flip through a field guide and it may seem daunting, but, as underscored by the millions of today’s bird-watching fans, not impossible.

A couple of tips for successful birding

Granted that your surest reference for identifying a new bird is one (or several) field guides, but also arm yourself with as much information about your particular bird-watching bailiwick as is available to you. That could be a park, county, or state checklist, such as Checklist of Birds of Mississippi.  It could be a book on bird finding in your area, such as A Guide to Birding Coastal Mississippi and Adjacent Counties.  It could be a state bird book, such as Birds of Mississippi.  You might use a birding trails map, such as one for the Mississippi Coastal Birding Trail. For bird information of a most timely nature, such as arrivals, etc, there are on-line resources that will be listed at the end of this chapter.

Divide and conquer! Of the 800 or so species illustrated in your field guide, not more than half of them occur in Mississippi. Not every species occurs in every season or in every year.  A bird such as the citrine wagtail is listed on the basis of a single record;  the odds of finding another are all but zilch.  One would not expect a blackpoll warbler in winter or a white-throated sparrow in summer. In fact, it is unlikely that more than about 225 of Mississippi’s 400-plus species are present in this state during any given month.  That certainly betters the odds for beginners.

The more species you learn, the less daunting are the challenges of changing bird distribution in changing seasons.  Birds are dynamic; even year-round residents may shift from their last known address to different habitats as the seasons warrant. Bone up on migration; even a rudimentary understanding of the major movements of migratory birds will put you on standby for a wave of broad-winged hawks, a tree full of orioles, or a patch of weeds littered with indigo buntings. 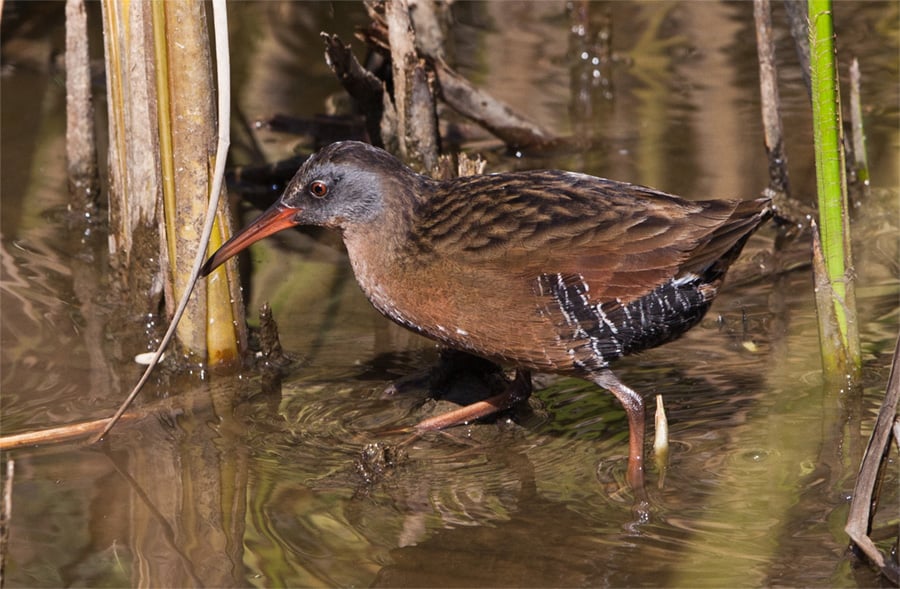 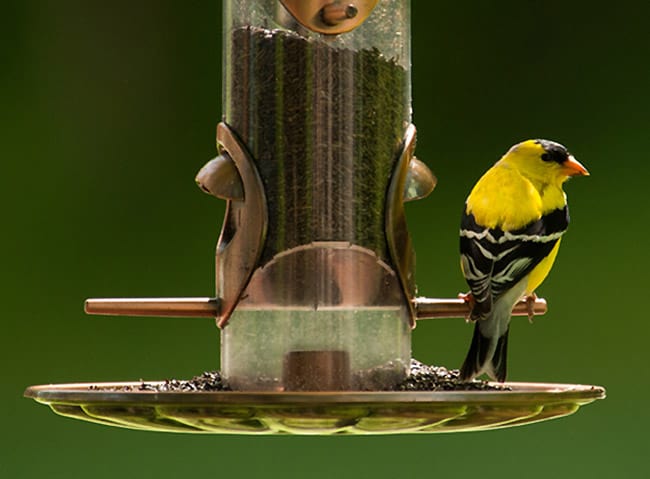