Woodpeckers are vertical birds. With their dense, powerful bodies and short legs, their strong grappling toes and heavy bills, woodpeckers are most comfortable clinging to the side of a tree. Using their curved toenails like hooks, they hang, supported from below by the strong, stiffened shafts of their tail feathers.

After their posture, notice their color: variations on a theme of black, white, and red. There are a few exceptions: the ornate flickers; the little, brown-backed Arizona woodpecker; the bottle-green and pink Lewis’s woodpecker; the sapsuckers, which, like the three-toed woodpeckers, add a dash of yellow.

But by and large, North American woodpeckers live by the credo that it’s better to be dressed up all the time than to be caught dressed down.

Woodpeckers are not songbirds, either in the taxonomic or the literal sense. Their calls run to yaps and explosive squirks, rattles, and squeals. They make up for their somewhat limited vocal range by making an impressive variety of non-vocal sounds, tapping and drumming out their telegraphic messages on dead stubs or metal downspouts.

Like their calls, woodpeckers’ visual displays are fairly basic as well, most of them consisting of bill waving, tilting side-to-side, or “butterfly flight” displays. Interestingly, woodpeckers use the same displays for both aggression and courtship, with subtle variations that signal their intent to a rival or potential mate.

Their skulls are thickened, but light, dense with a shock-absorbing, sponge-like layer of hollow chambers in between the shell-like outer and inner skull. Their eyeballs are fastened firmly within the sockets with a nylon-tough whitish membrane, presumably so they don’t jiggle when the bird hammers, and even their skin is tightly bound to their flesh. Woodpeckers are dense, muscle-bound, strong birds.

It is the woodpecker’s tongue that most fascinates me. Famed for their ability to extend their tongue out the length of their head or more, woodpeckers have an ingenious system for storing all that extra length. As it extends back into the mouth, a bird’s tongue forks into two hyoid horns.

In woodpeckers, these horns don’t stop at the back of the mouth; they wrap behind the skull, over its top, down between the eye sockets, and anchor in a nostril! The whole apparatus is enclosed in a sheath, and the tongue, propelled by the extra-long hyoid horns, can slide smoothly out as much as four inches beyond the bill in some species!

Gooey saliva and a stiffened tip, outfitted with retrorse barbs, make a wickedly effective apparatus for collecting insects deep in wood or anthills. The tongue is rapidly vibrated, snagging and dragging prey toward the waiting bill. Though many sources state that woodpeckers impale grubs on the tongue tip, it is more likely that they simply use the tongue to jiggle them closer, into grabbing position. If you use binoculars to watch woodpeckers at your peanut or suet feeder, you should be able to see their marvelous tongues in action.

All woodpeckers peck wood, at least to excavate a nesting cavity. Surprisingly, there are some, notably the flickers and the Melanerpinae (a tribe that includes the red-bellied, red-headed, acorn, and Lewis’s woodpeckers), that seem to do everything but peck into wood for their food. Nevertheless, woodpeckers share some fascinating morphological adaptations that allow them to cling and hammer.

Although most birds have three toes facing forward and one facing back, woodpeckers, all save the three-toed species, have two forward and two back, an arrangement known as zygodactyl.

Social monogamy is the trend in North American woodpeckers; it takes two devoted partners to chisel out a nesting cavity, defend it from interlopers, and tend the brood. Males, in fact, take on the lion’s share of excavation and even incubation and brooding duties in most species.

The nest cavity is usually the male parent’s roost hole, and he continues to sleep in it, incubating the eggs all night and much of the day as well. Nesting as they do in cavities, woodpeckers have no need for egg-camouflaging speckles and blotches; all lay white eggs.

Young woodpeckers are unique in several ways; they are born naked, having no need for insulating down in their warm wooden homes. From this naked state, they acquire their juvenal plumage, and in all but a few species, such as the red-headed woodpecker, this is markedly similar to adult plumage.

Their bills are adorned with touch-sensitive whitish corner flanges, easy for the parents to see in a darkened cavity, and their eyes remain sealed for 10 days or more. Early development concentrates instead on the legs and feet, which are outsized and strong and can carry the naked, still-blind young up the inside of the cavity to clamor for food.

Except for the desert-adapted Gila woodpecker and gilded flicker, all North American woodpeckers depend on trees, either in small groves or large, unbroken tracts. The endangered red-cockaded woodpecker, estimated to number about 14,000 individuals, depends on mature pines. Most other woodpecker species are noteworthy for their adaptability; the pileated woodpecker is a prime example.

Once thought to be a reclusive bird of the wilderness, this great, crested giant has embraced the patchwork of second-growth forest that has replaced farmland in much of the country’s interior and can even be seen nesting in suburban woodlots throughout much of the South.

Perhaps the most delightful characteristic of woodpeckers as a family is their visibility. Even in the quietest winter woodland, these discreet residents betray themselves with intermittent taps as they hitch and work over the tree trunks. Imagine the available surface area on all the tree trunks in a forest, realize that every inch may hold food for a woodpecker, and you begin to have an idea why so many different species and individuals can coexist in a small patch of woodland.

An average feeding station can host three or even six species at once; woodpeckers gladly accept our offers of food year-round. Though most are inclined toward wariness, they soon adjust to our rhythms of movement and observation, and often bring shrill young to our doorsteps to be fed as the summer wears toward autumn.

The red-bellied woodpecker has taken our food-spiked welcome literally, to enthusiastically extend its breeding range from a former stronghold in the Southeast to as far north as southern Ontario. Yet we must be careful not to take woodpeckers or their presence for granted. 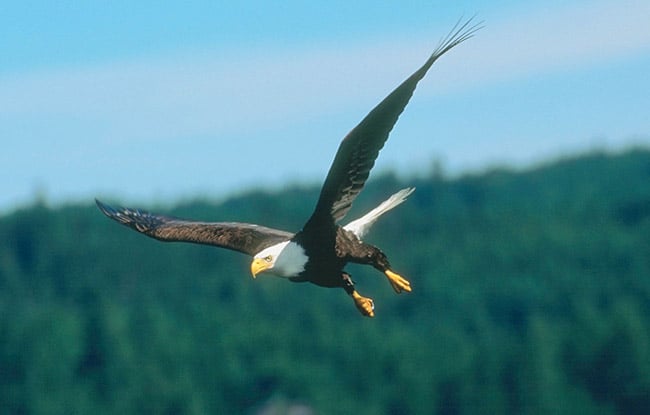